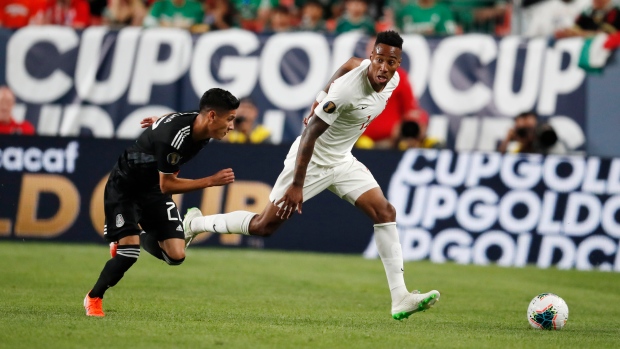 DENVER — Andres Guardado had two goals in the second half, Roberto Alvarado also scored and Mexico beat Canada 3-1 in the group stage of the Gold Cup on Wednesday night.

Mexico has won its first two matches by a combined score of 10-1 and took control Group A despite losing midfielder Erick Gutierrez in the first half.

The third leg of pool play for Group A moves to Charlotte, N.C., on Sunday. Canada will face Cuba in the first match of the day followed by Mexico against Martinique in the second match.

"A good test for us and never happy to be on the losing side but we learned a lot about ourselves and particularly the Mexicans," said Canada's head coach John Herdman. "We will have a very strong and fresh line up against Cuba ready to get the points we need to take us through to the quarterfinals."

The top two teams in the four-team pool advance to the quarterfinals starting on June 26. Martinique used two goals in the second half to beat Cuba 3-0 in Wednesday's first match to even its record to 1-1.

Cuba, which has been outscored 10-0 in its two games, was eliminated from the Gold Cup.

Mexico took control early in front of 52,874 fans at Mile High Stadium after losing Gutierrez to a leg injury in the 33rd minute. A ball was sent across into the box where Raul Jimenez got a shot off between two Canadian defenders.

Goalkeeper Milan Borjan made a diving save but the rebound went to Alvarado standing alone in the box, and he booted it in to give Mexico a 1-0 lead in the 40th.

Jimenez nearly gave Mexico a two-goal lead at halftime when he blistered a shot on net that Borjan batted away during injury time.

The Mexicans got their second goal when Guardado, who came on for Gutierrez in the first half, stole a pass in the offensive zone, dribbled to the top of the box and curled a high shot just inside the left post in the 55th.

Canada made it 2-1 when Jonathan David stole the ball from Mexican defenceman Nestor Araujo and fed Cavallini coming into the box, and his shot just got under goalkeeper Guillermo Ochoa in the 75th.

"I thought we were organized as a team and were unfortunate to give up the first goal before half, which kind of opened things up," said Canada captain Atiba Hutchinson. "Toward the last 15-20 minutes we created more and we take a lot of positives for that."

Guardado answered in the 77th when his shot from close in deflected of the foot of defenceman Doneil Henry and just under the crossbar.