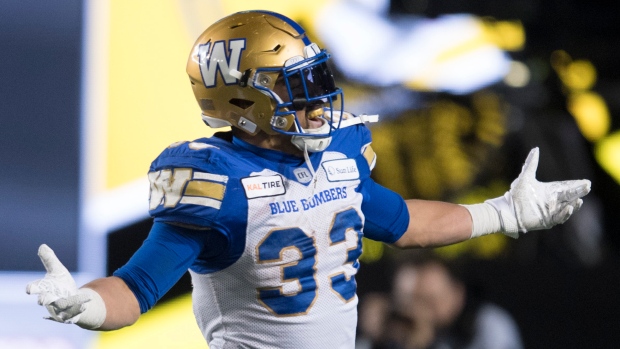 It was a magical season for the Winnipeg Blue Bombers in 2019.

Running back and Winnipeg native Andrew Harris was the catalyst for the Bombers in their 33-12 Grey Cup victory over the Hamilton Tiger-Cats, winning Most Outstanding Player and Most Outstanding Canadian.

It was the Bombers’ first Grey Cup title since 1990, but Harris – a Winnipeg native – hopes the city won’t have to wait near as long for another one.

“It’s been a great ride and the city’s been definitely vibrant with the success we’ve had and the championship. You know, people are definitely hungry and think that we’ve got a bit of a dynasty now, hopefully, and we can keep on doing this for a couple more years,” the running back told TSN’s Sara Orlesky via videoconference Thursday.

One thing he thinks will help Winnipeg’s chances for another Grey Cup? Continuity.

“It’s been exciting to see how well we’ve kind of maintained our free agents, and obviously we lost a few guys to free agency and a few guys to the NFL, but I think for the most part we did a really good job of maintaining some key players and key positions and acquiring some key players at key positions. We look at our offence and think that’s the exact same offence we’re going to have that was in the Grey Cup. That’s definitely exciting to go forward with,” he said.

Harris also spoke about how he is excited to work with former quarterback Buck Pierce, who takes over as the Bombers’ offensive coordinator this season.

"He’s actually ready for this opportunity and you know we’ve communicated to him and going to the office and seeing the guys getting to work before everything kind of shut down. It’s exciting. We’re very excited about the opportunity to get back at it,” Harris said.

When – or if in 2020 – Harris and the Bombers will be back at it is anyone’s guess, but the running back told Orlesky he’s doing his best to stay busy around the house while working on his life insurance licence. He said the rest of his family is trying to stay busy, too.

“Just hanging out. My daughter is doing homeschooling and she’s enjoying that, and my wife is actually doing her mortgage licence as well, too. So, everyone is kind of working toward something right now and you know, we have gotten our fill of Netflix in and watched a bunch of movies and shows, but still trying to stimulate our minds and be active and do certain things around the house. Just try not to go crazy, really.”