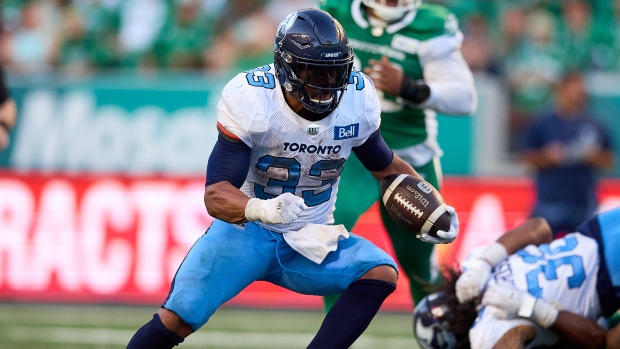 Toronto Argonauts running back Andrew Harris left Friday night's game against the Hamilton Tiger-Cats with an upper-body injury and did not return.

The veteran rusher dealt with shoulder issues in last week's game against the Ticats and TSN's Matthew Scianitti notes he appeared to be favouring the injury early in Friday's game.

Harris had three carries for 19 yards before departing.

The Winnipeg native has carried the ball 111 times for 471 yards and zero touchdowns in eight games so far this year heading into Friday's matchup. This is his first season in the Double Blue since joining the team as a free agent this past off-season.

The Tiger-Cats scored 17 points in the fourth quarter on their way to a 34-27 victory over the Argonauts Friday night.