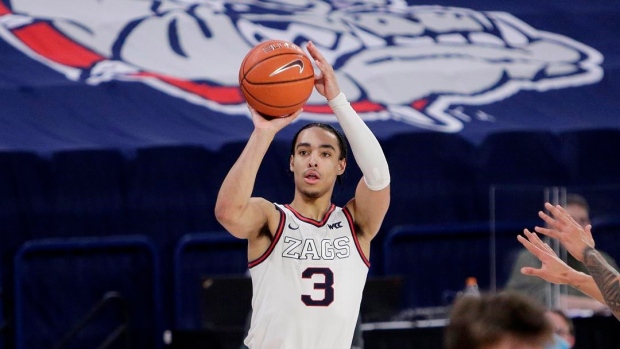 The Indiana Pacers drafted their second Canadian of the 2022 NBA Draft, selecting Andrew Nembhard with the 31st overall pick after picking Montreal's Bennedict Mathurin at No. 6 earlier in the night.

A native of Aurora, Ont., Nembhard played four seasons in college, being named a Bob Cousy Point Guard of the Year finalist recognizing the top point guard each year in NCAA basketball.
While the 22-year-old did not win the award – losing to Villanova graduate guard Collin Gillespie – Nembhard did enjoy a strong senior season, averaging 11.8 points and 5.8 assists per game in 32 games for the Gonzaga Bulldogs.

Nembhard began his collegiate career at Florida after playing high school ball at nearby Montverde Academy but elected to transfer to the Zags for the 2020-21 season. He only started 16 of 32 games for Gonzaga and saw his minutes and production dip slightly in his junior year, but he rebounded to post career college highs in many categories last season, including points, three-point percentage (38.3) and assists.

Internationally, Nembhard has represented Canada at the Under-16, 17 and 18 levels as well as playing on the senior men’s national team at the 2019 FIBA World Cup in China.