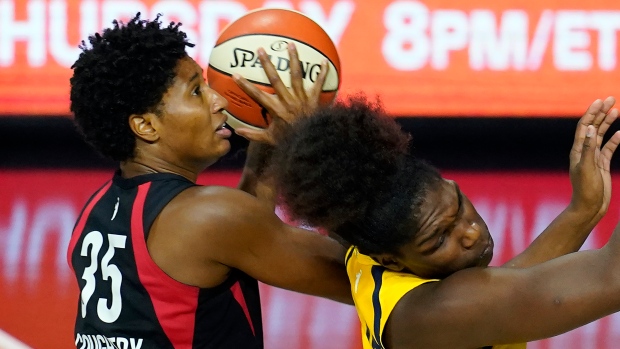 BRADENTON, Fla. — Angel McCoughtry scored 22 points on her 34th birthday and the the Las Vegas Aces made a franchise-record 10 3-pointers in beating the Minnesota Lynx 104-89 on Thursday night for their fourth straight victory.

Kayla McBride’s 3-pointer during a 13-4 run to open the fourth quarter was the record-setting 10th for the Aces, last in the league for 3-point attempts. They finished 10 of 18 from the arc, led by McBride’s 5-of-7 effort.

McCoughtry added eight rebounds, six assists and went over 1,500 career made free throws, the third player to do so in WNBA history. McBride added 21 points, A’ja Wilson 20 and Jackie Young had all 17 of hers in the second half.

Crystal Dangerfield scored 24 points and Napheesa Collier added 17, all in the first half, plus 11 rebounds and five assists for Minnesota (13-8), which lost its third straight.

Second-place Las Vegas (16-4) has games remaining against third-place Los Angeles and league leader Seattle in the final weekend of the regular season as its vies for a top-two finish that would give it a bye into the playoff semifinals.

Ariel Atkins hit a 3-pointer to give the Sparks a 71-68 lead with 2:53 remaining. Hines-Allen made consecutive 3-pointers, found Emma Meesseman for a transition layup and added a free throw in the final 1:28.

Washington (7-13) joined Dallas in a tie for eighth place with two regular-season games left. The top eight teams advance to the playoffs. Los Angeles (15-6) is in third place and takes on second-place Las Vegas on Sunday.

Candice Dupree scored 14 of her 22 points in the second half and Indiana beat New York to snap an eight-game losing streak.

Dupree was 9 of 19 from the field and had seven assists, six rebounds and two blocks. Kelsey Mitchell added 18 points, Teaira McCowan 14 and Tiffany Mitchell 11 for Indiana (6-15).

Paris Kea scored a career-high 21 points for New York (2-18) while Canadian Kia Nurse had 18 points in the loss.