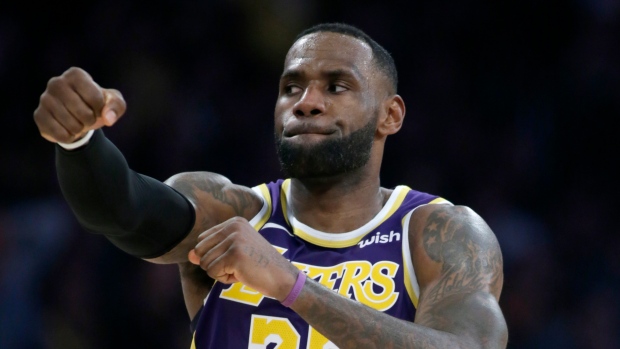 James had 29 points and 11 assists, and Kentavious Caldwell-Pope scored 12 of his 16 points in the fourth quarter of the Western Conference-leading Lakers’ third straight win.

The Lakers led 95-90 with three minutes left after Caldwell-Pope’s third 3-pointer, but Bogdan Bogdanovic scored five straight points to tie it. James hit a layup with 1:50 left, but Bogdanovic eventually replied with a tying layup with 22 seconds to play.

Barnes fouled James on the perimeter, and the shaky free-throw shooter smoothly hit both of his shots. Barnes then tried to drive for a tying shot, but Davis got his fourth block of the night in two-handed style.

In his first game back from a one-game rest of his sore right shoulder, Davis scored 17 points in his second lowest-scoring performance for the Lakers. James did most of the heavy lifting to hold off a spirited effort from the Kings, who lost for only the second time in six games since their 0-5 start.

Buddy Hield had 21 points and eight rebounds, and Bogdanovic added 18 points for the Kings in the L.A. return of Walton, who was fired by the Lakers last April after presiding over three consecutive losing seasons.

Sacramento nearly pulled off the upset despite playing without De’Aaron Fox, who missed his second straight game with a sprained left ankle, and Trevor Ariza, who sat out with a sore groin.

Richaun Holmes scored nine of his 17 points in the fourth quarter.

Sacramento led by 13 in the first half while hitting 10 3-pointers, but the Lakers scored 14 consecutive points in the second quarter to pull even. James posted the highlight of the half with a drive and a high-flying dunk right on top of Nemanja Bjelica, who had regrettably tried to draw a charge.

Alex Caruso scored a season-high 10 points for the Lakers while playing extra minutes in place of injured starter Avery Bradley.

Walton’s pregame introduction was greeted with an indistinguishable mix of boos and cheers of “Luuuuuke” for the coach who took over the Lakers in 2016. The former Lakers forward’s teams posted three straight improved records, but his performance wasn’t rated highly by former Lakers boss Magic Johnson or by general manager Rob Pelinka, who fired Walton just five days after Magic’s surprise resignation last April.

“It’s always a special place when you come into this building,” Walton said. “A lot of great memories in L.A. It was a great opportunity playing here and coaching here.”

Kings: Cory Joseph scored two points on 1-for-9 shooting in 23 minutes during his second start for the Kings. ... Dewayne Dedmon played despite a sprained right knee and scored five points. ... Ariza had treatment and painkilling shots over the past 24 hours, but the Kings decided to hold him out.

Lakers: Bradley is out for at least a week with a hairline fracture in his right leg. The veteran Lakers newcomer has averaged 9.6 points per game and played excellent defence while starting 10 of the first 11 games. Bradley got hurt Nov. 3 at San Antonio, but played four more games in pain before the injury was diagnosed. ... Caldwell-Pope started in Bradley’s spot and went 1 for 4 in the first three quarters before he found his shot. Caruso started 1 for 6, but got back-to-back layups in the third quarter on passes from James. ... NBA veteran J.R. Smith watched the game from courtside.