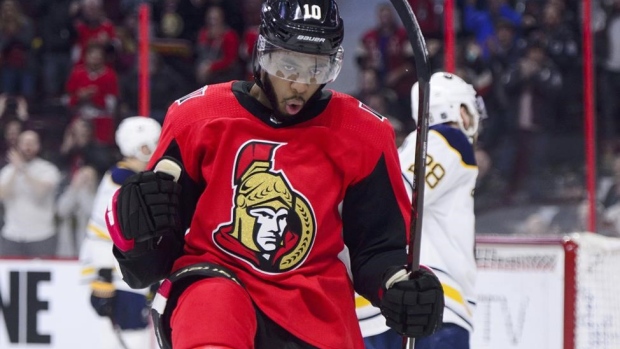 “I don’t think he knows how to play; I don’t,” Tortorella said last February, just hours before a game in Duclair’s hometown of Montreal, no less. “I don’t know if he just can’t comprehend or he’s just stubborn … He’s off the rails.”

Tortorella was certainly reminded on Saturday, after Duclair torched Torts’ Blue Jackets with a hat trick, becoming the first player in Ottawa Senators history to complete the trick with an overtime winner.

Ripped by Tortorella on his way out of Columbus. Five different NHL teams in six seasons. Three consecutive one-year contracts.

It’s fair to declare that Duclair’s renaissance in the nation’s capital is one of the best individual hockey stories of the season.

Duclair, 24, was named the NHL’s second star of the week on Monday. He has the most goals in the league (eight) since Dec. 4, giving him 18 tallies and seven assists for 25 points in 33 games on the season for the Sens.

Duclair: Fun to have Dad's on the trip

Senators forward Anthony Duclair on scoring a hatty with his Dad in attendance and what they need to fix after a slow 3rd period against the Blue Jackets.

Ten months ago, when he was torn to shreds by Torts, Duclair wasn’t far from the scrap heap. He had already not been given a qualifying offer in Chicago after a 23-game run and became an unrestricted free agent, signing in Columbus for the league minimum.

Everything changed with the trade, which came four days after Tortorella’s comments.

Duclair was sent to Ottawa, along with two second-round picks, in exchange for fellow pending free agent Ryan Dzingel and a seventh-round pick.

“It’s been awesome,” Duclair said. “I’m just getting a big opportunity here with the Senators. Starting from last year with the trade, my ice time has gotten bumped up. I’ve gotten a bigger role, more PP time. My confidence just grew from there.

“The coaches really believe in you and that helps a lot for sure.”

His coaches in Ottawa not only believe in him, Duclair said, but they have given him a longer leash in his game – one that didn’t exist under Tortorella.

“The big thing for me is when I make a mistake, I know I’m going to get back out there and prove myself, compared to in the past. When I’d make a mistake, I’d be glued to the bench and that was it for the night,” Duclair said.

Duclair’s ice time is up 33 per cent from his time in Columbus, an extra four minutes a game.

The verdict on the trade is lopsided. Duclair has as many goals this season (18) as Dzingel does points in Carolina after walking from Columbus, and he’s making less than half the money at $1.65 million. While few expected Duclair to be ninth in the NHL in goals approaching Christmas, he’s been one of the best goals-per-dollar values in the league, which means something to Ottawa.

The thing that probably has Tortorella bothered most while watching Duclair put it all together is that he knew this talent existed.

It wasn’t exactly a secret. Watch his skates and hands move in symphony in practice and it’s clear Duclair has the speed and high-end skill to be a dangerous player. Duclair had 20 goals and 44 points in his 20-year-old season with the Arizona Coyotes. Including last year, this is essentially his third 20-goal campaign in a six-year career.

Tortorella even said it himself last year during his rant. Tortorella said “we want to stay with it here because we think there is something at the end of this tunnel.” They stuck with him four more days.

“I’ve said it right along here, I think it’s worth it with him because I think there’s a tremendous upside,” Tortorella said last February. “But here we are again, the fourth team and another coach pissing and moaning about him, scratching him, benching him. Somewhere along the line, I think he has to understand, ‘I have to be more attentive and I have to start being more consistent.’”

Duclair fully admitted that consistency was an issue for him. So was conditioning. It wasn’t a strength problem, but a cardio one that might have held him back.

So Duclair went outside the box. He cut out lengthy gym sessions.

He hired Wladimir Afriani, a Haitian-born sprinter, and he trained with basketball players – no other hockey players. Hockey players are notoriously poor runners, but he spent his time at the track and on the field. Duclair tapped into his genes; his uncle, Farell Duclair, was a fullback in the CFL and his father, Wendell, was a wide receiver at Concordia University.

“All these basketball players do is run all the time. They’re way better runners than me and I think that’s pushed me to another level,” Duclair said. “Being in a different environment, instead of just around hockey players, I think that refreshes your mind a little bit, helps you get a different perspective on things.”

Now, the NHL has a different perspective on Duclair. The journey to Ottawa has been long, but the simple answer is sometimes it just takes that long for a talent to shine through.

“I feel like I’ve finally found a home in Ottawa,” Duclair said. “It’s close to home in Montreal. I have way more support from my family and friends here. It’s been awesome.”