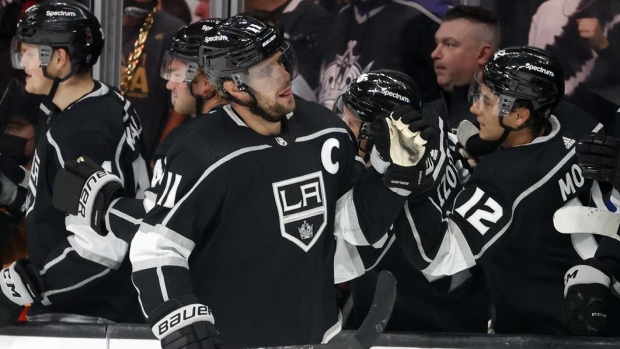 LOS ANGELES (AP) — Anze Kopitar had the Kings' third hat trick in an opener and two assists, Drew Doughty added a goal and three assists, and Los Angeles opened its season with a 6-2 victory over the Vegas Golden Knights on Thursday night.

Kopitar set a franchise record with five points in an opener. The last time Los Angeles had a hat trick in its first game was Jari Kurri in 1991. Luc Robitaille had the first in 1988.

Vegas — which defeated expansion Seattle in its opener on Tuesday — lost captain Mark Stone to a lower-body injury less than 8 minutes into the second period. Stone hunched over in pain near the boards after taking a shot near the Kings’ goal and barely made it back to the bench before being helped to the locker room.

Shea Theodore and Chandler Stephenson scored for Vegas. Robin Lehner gave up four goals on 31 shots in the first two periods before Laurent Brossoit came on for the final 20 minutes, allowing a pair of goals on 16 shots.

It is the second time Kopitar has scored two goals and compiled three points in an opener. The Kings' captain gave Los Angeles a 2-1 lead on a power-play goal with 43 seconds remaining in the first period on a wrist shot from just outside the right faceoff circle. He then extended the lead to 4-1 midway through the second period on a one-timer after getting the feed from Adrian Kempe.

Kopitar then completed the fifth hat trick of his career 15 minutes into the third period to make it 6-1.

Doughty had an assist on the first three goals before ripping a slap shot near the point on the power play early in the third period to give Los Angeles a 5-1 advantage.

Theodore opened the scoring nine minutes into the game with a slap shot from the right point that trickled underneath Peterson's pads.

Dustin Brown knocked in his own rebound four minutes later to even it at 1-1. Lehner stopped Brown's wrist shot with his left leg pad, but the puck bounced back to Brown, who was able to knock it in the second time.