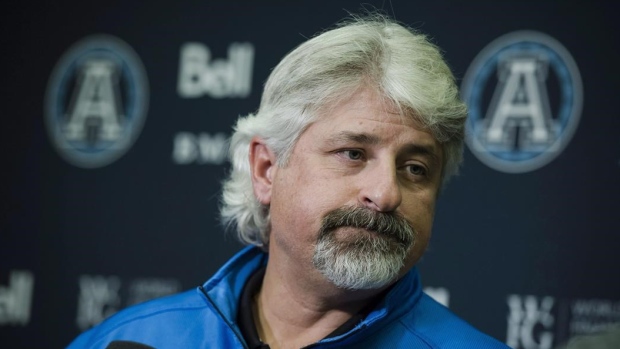 TORONTO — It's a career first that Jim Popp would rather not have.

On Thursday night, the Toronto Argonauts general manager will make the opening selection of the CFL draft for the first time in his 20-plus-year tenure in the league. The Argos secured the No. 1 pick after posting a league-worst 4-14 record last season.

Popp's teams have traditionally made the CFL playoffs, meaning he's often been relegated to the lower stages of the first round in the draft. So he's in somewhat uncharted waters this time around.

"Yeah, it's a first," Popp said with a chuckle. "Since we have the first pick, we need to celebrate it and make a big deal about it."

Toronto has 10 picks during the eight-round draft, the most of any CFL team. With five in the first 23 selections — including to start the second round at No. 9 — the Argos have a chance to significantly upgrade their Canadian content.

The '19 draft class is deep, particularly at receiver and the offensive line, and features several intriguing options throughout. But once again the NFL draft will give CFL general managers much to ponder.

There's still plenty of talent without any NFL offers, though. The list includes offensive linemen Shane Richards and Zach Wilkinson (the second- and fourth-ranked prospects, respectively), receivers Hergy Mayala (No. 5) and Kaion Julien-Grant (No. 8), defensive lineman Jonathan Kongbo (No. 6) and running back Maleek Irons (No. 8).

The dilemma facing CFL GMs is deciding whether to select a prospect who can report to training camp immediately or take a flyer on a player who's headed south and might report later.

"I can tell you the draft boards of all nine teams are different," Popp said. "Everybody's top 10 would be in a different order and even maybe with different people.

Popp said Canadian players heading to NFL mini-camps also are taking a risk because they're unsigned. And the decision to head south could impact the prospect's draft stock in Canada, causing him to drop and resulting in lost money.

"That decision might cost them as much as $10,000, $15,000, $20,000," Popp said. "But many of them are chasing a dream and might have in their minds that they might not get another chance to do this. That's what makes our draft really interesting.

"The great thing about having the first pick is you get to make that decision, you're not dependant on everyone else and how it all falls to you."

The Hamilton Tiger-Cats will make the second overall selection, followed by the Edmonton Eskimos. The Winnipeg Blue Bombers have the fourth and fifth picks, followed by the Saskatchewan Roughriders at No. 6. The Ottawa Redblacks and Grey Cup-champion Calgary Stampeders will complete the first round.

Neither B.C. nor Montreal have first-round selections although the Alouettes have three second-round picks (Nos. 13, 16 and 19) and nine overall. The Lions are scheduled to make their first pick in the third round, 26th overall, and have seven selections on the night.

Hamilton stands to fare well early with five selections in the first 24. After making the second overall pick, Hamilton will have two choices in the second (Nos. 10-11) and third (No. 22, No. 24) rounds.

Popp said the Argos have a clear idea of who they want to take first overall and the goal remains to have the player signed prior to opening Thursday's draft. Popp added he'd be open to dealing the No. 1 pick, but it would have to be a sweetheart deal.

The two first-round selections give Walters much flexibility. He could use both on players for right now, one to fill a need immediately and the other on a future pick, or trade No. 5.

"It's a nice spot to be in," Walters told reporters in Winnipeg. "If we don't do anything, I know we're going to get two good football players.

"I'm going to guess if somebody really wants to come up to pick No. 5 we'll listen, but like I said we're in a nice spot because I'm perfectly comfortable. I'm not going to move for the sake of moving . . . if the strategy is to move down or move one of the picks then we'll certainly listen."

"I think the top 20 picks are going to be as good as we've seen," he said. "Betts is the only Canadian kid that's got a priority free-agent deal, which generally helps our draft depth because you have to assume . . . . mini-camp invites rarely turn into NFL contracts so you'd have to play those odds.

"I think all of that contributes to a good draft."