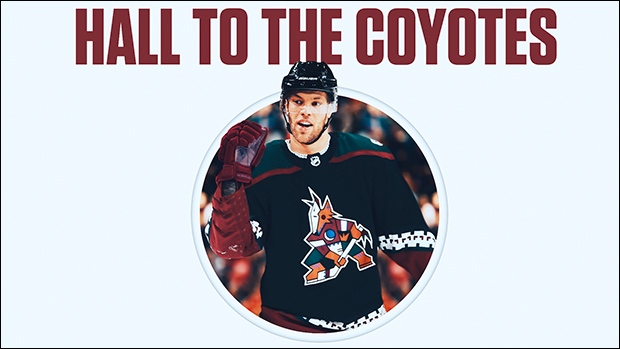 Eighteen months after he collected the Hart Trophy, the New Jersey Devils dealt Taylor Hall to the Arizona Coyotes on Monday, ahead of the NHL’s holiday roster freeze deadline.

The trade was not one for one.

The Devils sent the 2018 MVP and Blake Speers to the desert in exchange for a 2020 top-three protected first-round pick, a 2020 conditional third-round pick, as well as prospects Kevin Bahl, Nick Merkley and Nate Schnarr. New Jersey also retained 50 per cent of Hall’s remaining $6 million salary to make the deal happen.

It was a rare trade in both timing and circumstance: Hall is one of just five Hart winners to be moved within 18 months of being named the league’s most valuable player; it is also unusual to see a pre-Christmas deal for a pending UFA rental.

The question was not ‘if’ but ‘when’ on Hall’s exit from Jersey, with his apparent unwillingness to sign a long-term extension coupled with the Devils’ season swirling down the drain. He had been a healthy scratch for back-to-back games while GM Ray Shero worked out the deal, including one in Arizona.

“I watched the whole game, I knew it was a potential landing spot,” Hall said in a conference call. “It’s not every day that you get to jump that many slots in the standings overnight."

Monday’s move sent a clear signal to the rest of the NHL that Arizona is in it to win it. The window is open and the Coyotes are bounding through it.

Arizona entered Monday’s action in first place in the Pacific Division after 35 games played for the first time since 2011-12.

With Taylor ‘Howl’ in the fold, the case could even be made that the Coyotes are the team to beat now in the Pacific. They are stingy defensively, allowing the second-fewest goals against in the West, but they needed help offensively. Bingo. They’ve added a potential game-breaker now and that’s bad news for the Edmonton Oilers or Calgary Flames - or any team in the Pacific that might have been banking on the Coyotes coming up limp.

“They’ve got young studs up front, a lot of good defencemen, and two goalies who have played unbelievable this season,” Hall said. “Those are the things you need to be a contender and that’s what the Coyotes look like.”

Hall, 28, admitted that this season hasn’t been great - for him or anyone on the Devils. He has just six goals to go with 19 assists for 25 points in 30 games. Hall hasn’t quite been the same since that magical, 93-point campaign that brought home the Hart and brought New Jersey back to the playoffs two seasons ago. He missed 49 games with an injury last season.

But Hall said he feels healthy now and “confident I can help any team.”

That’s why there is little downside to this deal for the Coyotes. GM John Chayka didn’t part ways with his top picks or prospects, including Barrett Hayton, Victor Soderstrom and Jan Jenik.

Chayka also lottery protected the 2020 first-round pick. If the Coyotes miss the playoffs, and that pick happens to land in the top three, the pick traded will slide to 2021.

(Hey, the Coyotes did acquire Hall, the draft lottery’s lucky charm. That alone meant it had to be lottery protected.)

If Hall really is only a rental, and he won’t be re-signing in Arizona, then at least he is an extended rental - almost double the normal term for a player dealt around February’s trade deadline - for no more than the normal deadline cost.

How often do teams have the chance to add a Hart Trophy winner, even if for only a trial run? Say what you want about Hall’s incredible 2017-18 season, but he has finished in the Top 10 in league scoring twice in Edmonton.

Too often, front offices fail to capitalize on the window that’s open to them, not realizing the opportunity until it's over. That won’t be a complaint about Chayka, who added Phil Kessel last summer.

Plus, Hall reiterated that he is open to a potential long-term deal. He said the reporting to date on his interest in signing before July 1 has been mischaracterized.

“I am open to anything. I haven’t closed the book on signing with any team before July 1st,” Hall said. “In talking with [GM] John Chayka, I think both sides are really comfortable just playing and the contract will sort itself out.”

Hall has been in the NHL for 10 years now. With stops in Edmonton and New Jersey, he’s practically bathed in losing for a decade. He’s played in 592 regular season games, with combined team records of 228-288-76, and appeared in just five Stanley Cup playoff contests.

The money will be there. Hall said this is only about the best opportunity to win now. And the Coyotes have bought themselves a couple lottery tickets - both for hockey’s holy grail and the chance to keep Hall.

“I’ve learned to expect the unexpected,” Hall said. “I was disappointed when I got traded to New Jersey, but that turned out to be really good.”