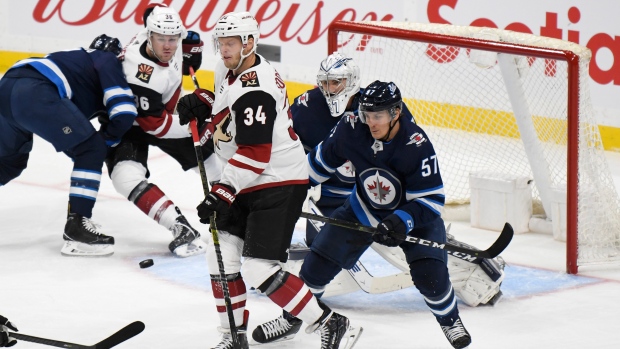 WINNIPEG — Nick Schmaltz knew the Arizona Coyotes' power play was going to finally click. It did in a big way Tuesday.

Schmaltz and linemate Christian Dvorak each scored with the man advantage just over two minutes apart to help lift the Coyotes over the Jets 4-2 for a rare victory in Winnipeg. Dvorak also scored at even strength.

"I don't think it was anything that changed," Schmaltz said of the team's power play that was 0-for-9 heading into the game. "We were going in the right direction.

"I thought last game was better, we had the good looks and they just weren't going in, so we stuck with it and eventually they're going to go in."

"We just didn't kill two penalties. That, to me, is the difference," Jets coach Paul Maurice said.

He also saw weaknesses in his team's penalty kill rather than strength in Arizona's power play.

The Coyotes had lost 10 straight games in Winnipeg since the Jets franchise moved from Atlanta in 2011.

Darcy Kuemper made 38 saves for the Coyotes, who have points in their past three games (2-0-1) after opening the season with a pair of losses.

Kuemper has allowed two goals or less in 11 straight games, tying him with Nikolai Khabibulin's franchise record from 1998-99.

Mark Scheifele extended his point streak to five games with his team-leading fourth goal of the season for Winnipeg. He also added one assist.

Kyle Connor also scored for Winnipeg and Josh Morrissey had a pair of assists.

Jets captain Blake Wheeler said the team wants to play well defensively and work from there.

"I think we're still trying to establish ourselves and figure out our identity as a team," Wheeler said. "We're very much a work in progress.

"We're a competitive group and we've come to work every single day since training camp. That's a great thing to fall back on. Tighten a few things up. Also keeping in mind we've played quite a bit of hockey here to start the year."

Connor Hellebuyck stopped 31 shots for the Jets (4-4-0), who were playing the second game of a five-game homestand and coming off a 7-2 loss to Pittsburgh.

The teams were tied 1-1 after the first period, but Arizona led 4-1 following the second.

With Coyotes forward Derek Stepan off for hooking, Patrik Laine blasted a shot that hit the post and Scheifele sent the rebound past Kuemper at 7:35 of the first.

Garland deflected a shot from the point by Ekman-Larsson with eight seconds remaining in the opening period to tie it up.

Dvorak and Schmaltz added their power-play goals by 7:21 of the second, although Dvorak's was a gift. Jets defenceman Josh Morrissey had accidentally flipped the puck into his own net after Dvorak touched it.

"I went to pass it to (Stepan) there and we got a pretty lucky bounce there so we'll take it," Dvorak said.

Schmaltz then scored through traffic and Dvorak added his second goal of the game when he beat Hellebuyck on the glove side at 17:47.

With Garland in the penalty box for a high-sticking double minor against Laine, Connor flipped a backhand shot by Kuemper at 4:48 of the third to make it 4-2.

The Jets couldn't capitalize on a late power play.