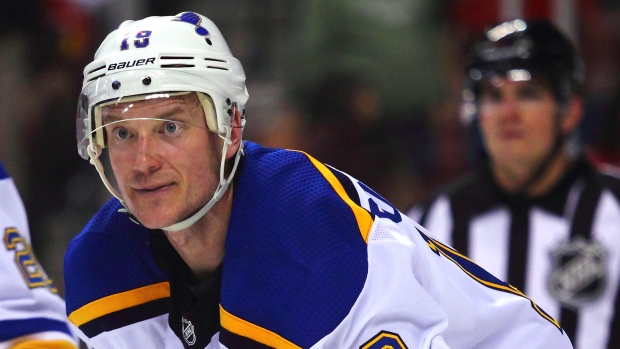 Armstrong revealed that Bouwmeester became “unresponsive” on the bench during the episode and said “medical personnel used a defibrillator to revive him.”

Armstrong said Bouwmeester, 36, is still undergoing a battery of tests in hospital to determine how and why the cardiac episode happened.

“There is never a good time for something like this to take place, but there could not have been a better location than the Honda Center,” Armstrong said. “Thanks again to everyone uninvolved at the Honda Center and the Ducks organization for their life saving efforts.”

The Ducks-Blues game was postponed with 7:50 remaining in the first period. No makeup date has been announced; Armstrong said the condensed schedules with the bye week have complicated rescheduling the game. He said the replayed game will start with a 1-1 tied score, but the game will be a full 60 minutes.

“But that’s secondary to where we are right now, I know they’re working on it and we will play the game,” Armstrong said.

Blues captain Alex Pietrangelo said he went to go visit Bouwmeester at the hospital with his dad after contest was postponed. The Blues were on their Father’s Trip, with most of the team’s dads in attendance for the game, including Bouwmeester’s father, Dan.

Pietrangelo used FaceTime with Bouwmeester, who was one of the NHL's best ironmen over his 17-season career, once racking up a streak of 737 consecutive games played, to communicate with the rest of the team.

Pietrangelo was right near the Blues’ bench and helped, along with teammate Vince Dunn, flag down the medical staff immediately after Bouwmeester collapsed.

Their swift reaction, along with the heroic work of the Blues and Ducks’ athletic trainers, doctors and arena paramedics likely saved Bouwmeester’s life. The situation played out according to the NHL’s Emergency Medical Standards plan, which is rehearsed at each team's home arena and home practice rink prior to the first exhibition game of every season. It has helped prevent catastrophic results in other critical medical situations, including the career-ending cardiac episodes suffered by Detroit's Jiri Fischer and Dallas' Rich Peverley, as well as other skate cuts that have resulted in significant blood loss.

“The doctors and the EMT, they were impressive to see them go into action,” Pietrangelo said. “It’s hard to even explain, I mean, it happened so fast. It felt like it was an eternity for us. It’s not easy to see anybody go through it, let alone your close friend and teammate that you spend every day with.”

The Ducks’ players also huddled around Bouwmeester’s concerned Blues’ teammates, then Pietrangelo said they all spent time together after the game was postponed.

“Hockey gets pushed aside really quickly when you’re talking about something like this,” Pietrangelo said. “You play against each other and you battle against these guys, but we all have a lot of respect for each other. A lot of those guys played with ‘Bo’ have been around ‘Bo,’ a lot of them are friends. That’s just how the hockey community is – it’s a really tight group of people.”