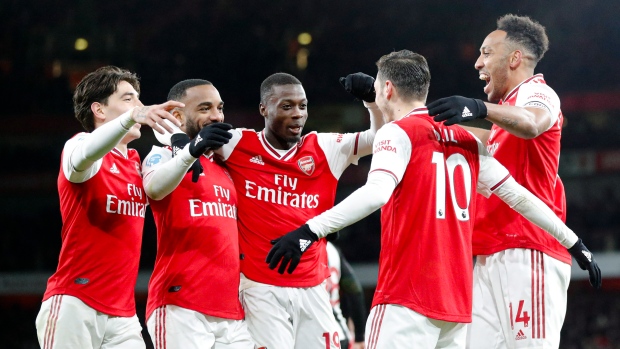 LONDON — Pierre-Emerick Aubameyang, Nicolas Pepe, Mesut Ozil and Alexandre Lacazette scored in the second half to give Arsenal a 4-0 victory over Newcastle on Sunday and end a run of four straight draws in the Premier League.

The Gunners overcame a lifeless first half to record their first league win since New Year's Day but they only rose to 10th place.

With Newcastle playing with a flat back five, the onus was on Arsenal to break them down. That only came after the break, with the hosts taking the lead in the 54th minute.

Pepe twisted and turned in the area and pulled back to Eddie Nketiah, but the young striker's 10-yard shot glanced off the top of the crossbar and went over. Shortly after, Aubameyang was in the perfect place to find the corner with a cushioned header from Pepe's pinpoint cross.

Pepe enjoyed a golden few minutes as three minutes later he got on the scoresheet to make it 2-0.

This was down to the skill and enterprise of Bukayo Saka, who nutmegged Valentino Lazaro and teed up Pepe to sweep into the bottom corner.

That seemed like that would be the end of the contest, but on another day Newcastle might have made a comeback.

Only a brilliant block by Arsenal defender David Luiz denied Ciaran Clark while Allan Saint-Maximin, whose pace and energy was a threat throughout, struck a post with a curling shot.

The hosts extended their lead to 3-0 in the 90th minute when Ozil slotted in from Lacazette's assist.

The Frenchman also ended a long wait for a goal as he struck for the first time in more than two months as he scuffed home another Pepe cross at the death.

Newcastle is 13th, seven points above the relegation zone.