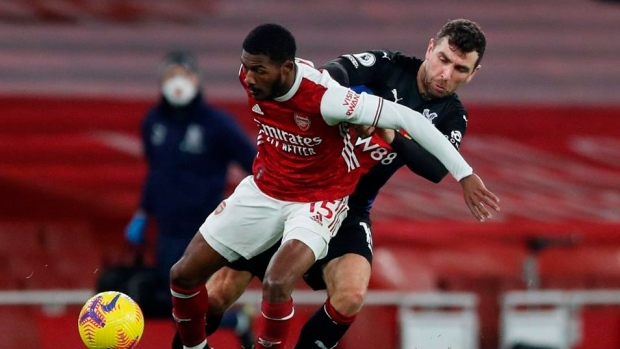 LONDON — Arsenal's three-match winning streak in the Premier League ended with a 0-0 draw against Crystal Palace on Thursday as the Gunners missed a chance to keep their momentum going and climb up the table.

Arsenal remained rooted in 11th place with 24 points, while Palace stayed in 13th with 23 points.

Arsenal manager Mikel Arteta was under severe pressure before Christmas after the team's worst start to a season since 1974. But wins over the festive period against Chelsea, Brighton and West Bromwich Albion moved his team back into midtable and in sight of the European positions.

But Thursday's game saw his team revert back to its old form, lacking creativity in midfield and cutting edge up front.

Arteta partly blamed fatigue, saying his players lacked “some freshness and some quality in the final third.

“We lacked the last pass or the last shot. We had to generate more to win that game," he said.

Arsenal controlled the match against Palace in the opening stages of the first half with the home side’s clearest chance coming in the 20th minute.

Captain Pierre-Emerick Aubameyang cut inside from the left and unleashed a curling shot that appeared to fool goalkeeper Vicente Guaita. He wildly palmed the ball just in front of him and then mispunched before collecting it.

But Palace slowly grew into the match, putting Arsenal under pressure in midfield and on the counterattack. The visitors came close from a free kick in the 39th when James Tomkins leaped above centre back Rob Holding and headed the ball against the crossbar.

Three minutes later, Christian Benteke beat defender David Luiz in an aerial duel to a cross from Tyrick Mitchell and the forward’s close-range header nearly beat Bernd Leno. But the goalkeeper’s leaping fingertip save was enough to push the ball out of danger for a corner.

Arsenal piled on the pressure at the start of the second half, creating a number of chances with Hector Bellerin firing just wide after Palace failed to clear and the ball fell to him in the 46th.

Aubameyang’s scoring drought continues in the Premier League. After his chance in the first half, Crystal Palace defenders did everything to keep the forward from taking the ball on his favoured left foot.

Palace assistant manager Ray Lewington kept shouting “right, right” at the top of his lungs to urge his players to keep the ball on Aubameyang’s weaker right foot.

Manager Roy Hodgson lauded his team's performance, saying he was happy to come away with a clean sheet.

“It was a fantastic piece of discipline and hard work from the players,” he said. “It was a good evening for us.”

He added: “If we keep playing the way we did today, I think there’s points in the bag.”

Arsenal missed the pace and creativity of left back Kieran Tierney, who was rested as a precaution with muscle tightness.

“They did defend very well with loads of players," Bellerin said. "I felt that the little spark of creativity was missing today. Today, we didn’t have that little bit of luck that we needed.”

Arteta also acknowledged that the absence of Tierny, who will have an MRI scan on Friday, was a big factor.

“He's a real threat and the way we attack on the left is really important, but he is injured,” the manager said. “We needed to find other options. We knew the plan, but the execution wasn’t enough today.”