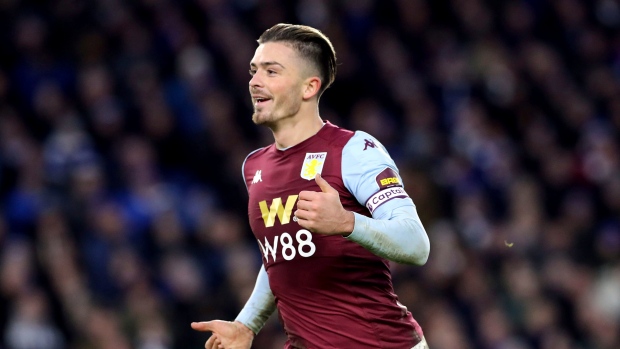 Aston Villa's push for European football next season will have to continue on without captain Jack Grealish for a little longer.

Manager Dean Smith confirmed on Friday that the England midfielder had a setback in his recovery from a shin injury and will be out for two more weeks.

"Myself and Jack were quite optimistic to get him back a bit sooner than he probably should and he's had a setback that will probably put him back a couple of weeks," Smith said in his press availability before Saturday's match with Liverpool at Anfield.

On top of Saturday's match, Grealish will be unavailable for a Apr. 21 match against Manchester City and could miss out on an Apr. 25 date with West Brom, both at home.

Smith suggests that Grealish pushed himself too hard in training.

"He was really good in training, but he couldn't tolerate the loading," Smith said. "It's a loading injury and we have to de-load him over the next few weeks and get him back from there. We know it's not a long-term injury and he will be back. We all, Jack included, probably pushed him back a little bit too quickly. He wanted to get back, we wanted him to get back and he had a little setback."

In 22 league appearances this season, Grealish has six goals.

Villa currently sits ninth in the table on 44 points. With the creation of the Europa Conference League for the 2021-2022 season, England's top seven teams will qualify for European football for next season. Villa's opponents on Saturday, Liverpool, currently occupy seventh place on 49 points, having played one more match.