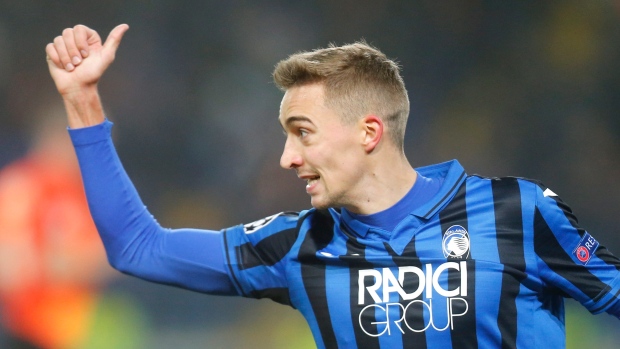 KHARKIV, Ukraine — Champions League newcomer Atalanta qualified for the knockout stages with a 3-0 win at Shakhtar Donetsk on Wednesday.

Timothy Castagne scored the opener in the 66th minute and Mario Pašalic doubled Atalanta’s tally shortly after Shakhtar defender Dodô was sent off for a slap on Remo Freuler.

“I can't find the words to describe this unique feeling," Atalanta captain Alejandro “Papu” Gomez said. "This will remain in the history of the club and in the history of football. We're all very humble, none of us is a star, this is just down to hard work and sacrifice.”

Atalanta lost its opening three matches in the competition before turning things around and finished second in Group C with seven points. Group winner Manchester City beat Dinamo Zagreb 4-1, which meant Shakthar finished third in the group and will enter the Europa League knockout stage.

“I wasn't relaxed until the third goal, to be honest. It was difficult, but sometimes it’s destiny,” Atalanta coach Gian Piero Gasperini said.

Shakhtar, Atalanta and Dinamo all had a chance of finishing second in the group.

Atalanta wasted a number of chances but also had a scare in the 15th minute as Viktor Kovalenko had the ball in the back of the net for Shakhtar but it was ruled out for offside in the buildup.

Atalanta goalkeeper Pierluigi Gollini also made a number of impressive saves before his team broke the deadlock when Castagne bundled in a cross from Alejandro “Papu” Gomez. The goal was checked for a possible offside but was eventually given after a long VAR review.

Atalanta’s hopes of progressing increased further when Dodô was shown a straight red card in the 77th and Pasalic doubled his side’s lead three minutes later when he prodded in Ruslan Malinovskyi’s free kick.

Shakhtar still pressed but the chances of a comeback had already ended when Gosens fired home deep into stoppage time.

“It was incredible, I am tired but so happy," Gollini said. "After the defeat in Manchester it seemed impossible, but we did something amazing and qualified.”