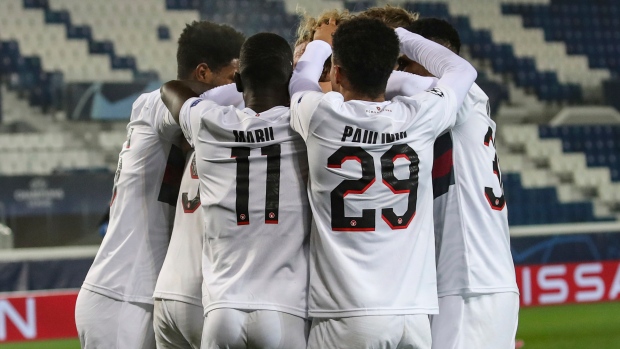 BERGAMO, Italy — FC Midtjylland picked up its first-ever point in the Champions League on Tuesday with a 1-1 draw at Atalanta.

It was nevertheless a historic point for Midtjylland, which had lost its previous four matches, conceding 11 goals and scoring just two.

"I’m incredibly proud to get a point with Midtjylland, and we could have even taken all three, but it was wonderful to hear the whistle at the end,” visiting goalkeeper Jesper Hansen said.

Atalanta moved into the second spot in Group D, one point above Ajax, which lost 1-0 at Liverpool. The results mean that Atalanta needs just one point against Ajax in the Netherlands next week to send it through to the knockout stage for the second successive year.

“It wasn’t easy, we haven’t qualified yet but this draw gives us a little advantage for the match in Amsterdam,” Atalanta coach Gian Piero Gasperini said.

“We can go there and play with the same grit and determination we saw at Liverpool. At the beginning of the season I would have signed on the dotted line to be at this point in these conditions.”

Gasperini's side reached the quarterfinals last year in its first Champions League campaign.

Atalanta had lost at home to Hellas Verona in the league at the weekend but was still full of confidence after beating Liverpool at Anfield last week.

The Italian side wasted a couple of early opportunities and was made to pay for its profligacy when Midtjylland took the lead in the 13th minute. Sory Kaba chested down a ball with his back to goal and Scholz volleyed it into the bottom left corner.

Midtjylland defended resolutely and looked the likelier to score as the Danish side sought its first win in the competition.

But Atalanta laid siege to the Midtjylland goal and finally broke through when Hans Hateboer put in a cross from the right and defender Romero headed it into the near top corner.

“We're playing well in defence and midfield, we're lacking a bit in attack,” Gasperini said. "We're struggling ... and when you don't manage to finish off chances that you create then nervousness sets in, too.

“Fortunately Romero scored, maybe I should play him up front."