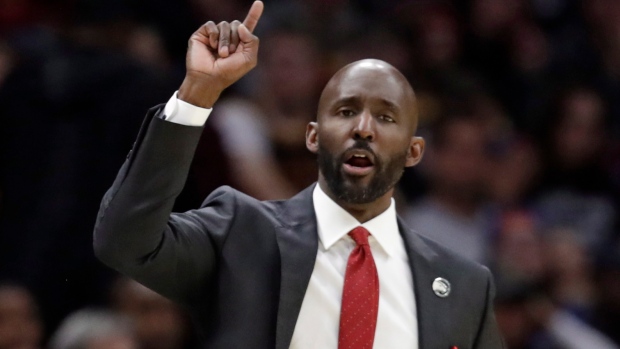 Atlanta Hawks coach Lloyd Pierce was fired on Monday following a disappointing start to a season of heightened expectations.

Hawks president Travis Schlenk announced the move in a short statement released by the team.

Assistant coach Nate McMillan has accepted the interim head coaching job with the Hawks, according to ESPN's Adrian Wojnarowski. McMillan has coached 16 seasons in the NBA with the Seattle Supersonics, Portland Trailblazers, and Indiana Pacers

The Hawks are 14-20 and 11th in the Eastern Conference, following a 109-99 loss at Miami on Sunday night. The teams play again in Miami on Tuesday.

“We would like to thank Lloyd for his work and commitment to not only the Hawks organization but the city of Atlanta," Schlenk said in the statement.

Schlenk said the move, which comes less than a week before Atlanta hosts the All-Star Game, is timed to help the team enjoy a second-half resurgence.

“We have high expectations for our team on the court and we believe by making this change now that we can have a strong second half of the season,” Schlenk said.

The Hawks last appeared in the playoffs in 2017. The team has rebuilt around point guard Trae Young and forward John Collins and invested heavily in veterans in the off-season.

The biggest move came when Schlenk made Bogdanovic an offer — four years for $72 million — the Sacramento Kings didn’t match.

Injuries to Bogdanovic and others have prevented Pierce from having a healthy roster, however.

The Hawks' progress also has been hurt by the loss of emerging star De'Andre Hunter to knee surgery.

The Hawks did not immediately name an interim coach. The likely choice is Nate McMillan, the former Indiana coach who was added to Pierce's staff in the off-season.

McMillan filled in for Pierce when Piece was recently away from the team while his wife was giving birth.