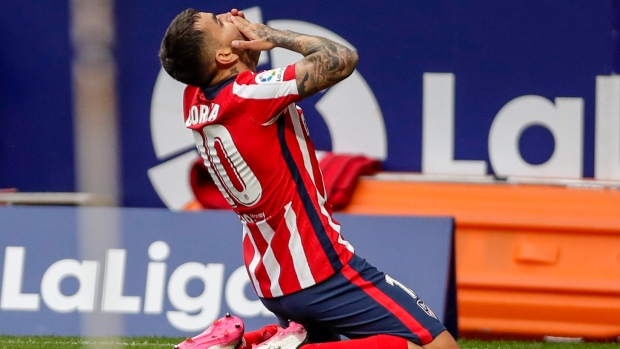 MADRID — Atlético Madrid defeated Huesca to regain sole possession of the Spanish league lead on Thursday, while Lionel Messi scored twice as Barcelona stayed in the title race with a victory over Getafe.

Ángel Correa and Yannick Carrasco scored a goal in each half to secure a 2-0 home victory for Atlético, which moved three points in front of second-place Real Madrid.

Messi's double in a 5-2 win over Getafe helped Barcelona return to third place. The Catalan club is two points behind Madrid and five behind Atlético with a game in hand.

Defending champion Real Madrid had provisionally taken the lead on Wednesday by winning 3-0 at Cádiz.

“This league is very complicated, we can't relax,” Atlético coach Diego Simeone said. “We already have to start preparing for our next match.”

Atlético was coming off a 5-0 rout of last-place Eibar after two consecutive setbacks had allowed Madrid and Barcelona to move closer to the top.

Simeone was still without forwards Luis Suárez and João Félix because of injuries.

Correa, one of the players replacing Suárez and Félix, opened the scoring after going past a defender inside the area and firing a low shot into the net in the 39th minute at the Wanda Metropolitano Stadium. Carrasco sealed the victory by converting a cross inside the area in the 80th.

Correa had scored twice in the game against Eibar last weekend.

It was the second consecutive loss for Huesca, which stayed just inside the relegation zone.

Messi reached 25 league goals for the season by opening the scoring in the eighth minute and making it 3-1 in the 33rd at the Camp Nou.

The teams had traded own goals before that. Barcelona defender Clément Lenglet deflected the ball into his own net in the 12th and Sofian Chakla gifted one back when he tried to hit a back pass to his goalkeeper, who had rushed off his line, and it trickled into the goal in the 28th.

Enes Unal made it 3-2 with a penalty in the 69th, but Ronald Araújo added Barcelona's fourth with a header in the 87th and Antoine Griezmann sealed the victory by converting a penalty in stoppage time.

Getafe is four points above the relegation zone in 15th place, having scored just 24 league goals in total — one fewer than Messi.