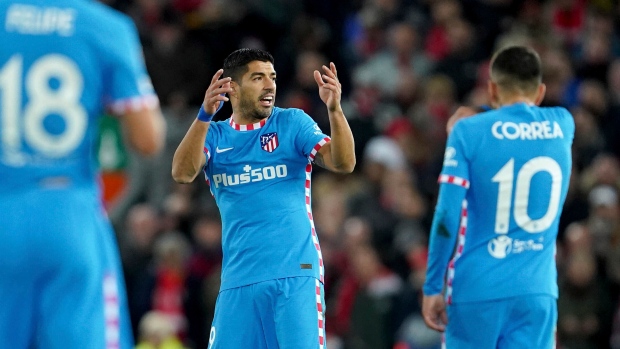 MADRID (AP) — A late push moved Real Sociedad back to first place in the Spanish league. A late collapse kept Atlético Madrid from getting closer to the top.

Atlético conceded twice in stoppage time in a 3-3 draw at Valencia on Sunday, while Sociedad scored twice in the final 20 minutes in a 2-0 win at Osasuna.

The victory put Sociedad on 28 points, one more than Real Madrid, which had gone top after beating Rayo Vallecano on Saturday.

Atlético is in fourth place, five points behind Sociedad with a game in hand.

Sevilla later joined Madrid on 27 points after beating Real Betis 2-0 in the Seville derby. Sevilla and Madrid also have a game in hand compared to Sociedad.

Barcelona was able to stay in ninth place going into the international break despite squandering a three-goal lead in a 3-3 draw at Celta Vigo on Saturday.

Substitute striker Hugo Duro entered the match in the 85th and scored in the second and sixth minutes of injury time to give Valencia a point with a home draw against Atlético.

Luis Suárez, Antoine Griezmann and Sime Vrsaljko had scored for the defending champion, which was coming off a loss at Liverpool in the Champions League.

“In soccer you pay for your mistakes,” Atlético coach Diego Simeone said. “I’m responsible. It’s my mistake in the end. We played a great match until the final minutes.”

Valencia, which stayed in 10th place, was coming off a 2-0 league win against Villarreal that snapped the team’s seven-game winless streak.

Valencia hasn’t beaten Atlético in 14 consecutive matches, with its last win over Simeone’s team coming in 2014.

Suárez opened the scoring for the visitors from inside the area in the 35th before Valencia equalized with an own-goal by Atlético defender Stefan Savic in the 50th. Griezmann put Atlético ahead again in the 58th after a run from behind the midfield line that ended with a nice strike into the top corner, and Vrsaljko netted the third two minutes later from close range after a video review.

Valencia threatened with Daniel Wass hitting the crossbar in the 63rd, then sealed the comeback with Duro scoring from near the penalty spot in a breakaway and then with a header off a late set piece.

Simeone lost right back Kieran Trippier because of a clavicle injury following an awkward fall less than five minutes into the match at the Mestalla Stadium.

Mikel Merino scored from inside the area in the 72nd and Adnan Januzaj added to the lead by converting an 82nd-minute penalty for Sociedad in its win at Osasuna.

The victory extended Sociedad’s unbeaten run to 16 consecutive matches in all competitions. It’s only loss this season came in the first round of the Spanish league against Barcelona at the Camp Nou Stadium.

“We are very proud of what we have been achieving,” Sociedad coach Imanol Alguacil said. “But there are a lot of matches left and anything can happen in the next few rounds.”

It was the second loss in a row for Osasuna, which has only one victory at home this season. It had been unbeaten in five straight matches before a loss at Sevilla two rounds ago.

Sevilla won at 10-man Betis for its fifth victory in the last six Seville derbies. It hasn't lost to its rival since 2018.

Julen Lopetegui's team got on the board in the first half with a goal from Marcos Acuña and in the second with an own-goal by Betis defender Héctor Bellerín.

Betis played with 10 men from the final minutes of the first half after midfielder Guido Rodríguez was sent off with a second yellow card.

It was Sevilla’s fourth win in its last five league matches. It hasn’t lost since a 1-0 defeat at Granada last month.

It was the third loss in a row for fifth-place Betis in all competitions, with Manuel Pellegrini's team being outscored 9-0 in that stretch.

In its first match since coach Unai Emery told the club he was not taking a job with Newcastle in England, Villarreal edged last-place Getafe 1-0 at home with a goal by Manu Trigueros after 10 minutes.

It was Villarreal's first victory after four consecutive winless matches in the league, including three losses. The victory left the club in 12th place.

Getafe was coming off its first win of the season against Espanyol.