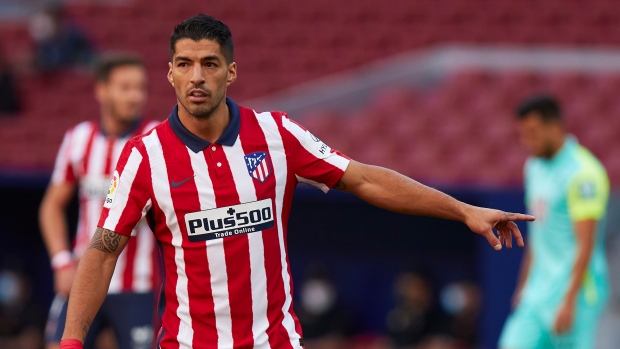 Two consecutive scoreless draws quickly dampened the hype surrounding Atlético's new attack after it had opened the season with an impressive 6-1 victory over Granada.

Atlético and Suárez struggled again on Saturday, being held by Villarreal at home in a Spanish league match which it finished with no shots on target.

“Sometimes it's hard to explain these situations when you try everything but can't create opportunities,” said Diego Simeone, who was seeking his 200th Spanish league win as Atlético's coach. “We have to look at the positives. The results haven't been what we expected but I like the team's attitude.”

Suárez thrived in the opener but had already struggled — along with the rest of the team — in the 0-0 draw at promoted Huesca on Wednesday, a game that marked the Uruguay striker's first start with his new club after being told by Barcelona that he wasn't wanted anymore.

Villarreal had dangerous chances at the Wanda Metropolitano Stadium on Saturday, but it couldn't capitalize on them and squandered a good opportunity to come away with the victory. Atlético goalkeeper Jan Oblak made a few good saves to keep the clean sheet.

“They played a great match and didn't leave us any space to play,” Oblak said. “We should have done more but we couldn't. The draw was not what we wanted.”

Unai Emery's Villarreal, which entered the season amid high expectations and is sitting third in the standings, was coming off two wins from its first four matches. It lost 4-0 to Barcelona at the Camp Nou Stadium last weekend.

“This gives us credibility,” Emery said. “It was a lot different from what happened against Barcelona. We feel like we could've won it.”

Expectations also rose for Atlético after it signed Suárez and he scored two goals and set up another in about 20 minutes off the bench against Granada, but there was only disappointment after the consecutive 0-0 draws going into the international break.

Suárez, starting in place of Diego Costa and playing alongside Portuguese forward João Félix, had few chances in front of goal, just as had happened against Huesca. Suárez was substituted by Costa in the 70th minute on Saturday.

“It was good to start with a win, but if we can't keep it up, the euphoria diminishes," Oblak said. "We have to keep working and keep improving so we can continue winning matches.”

BETIS AT THE TOP

Manuel Pellegrini's Real Betis held its spot at the top of the standings with a 2-0 win at Valencia thanks to goals by Sergio Canales in the first half and Cristian Tello in the second.

The victory ended Betis' two-game losing streak after it had opened with a pair of consecutive victories.

Real Sociedad moved immediately behind Betis in the standings after defeating Getafe 3-0 at home for its second win in five matches. Mikel Oyarzabal, Mikel Merino and Cristian Portugués scored for Sociedad.

Getafe remained two points off the lead with a game in hand.

A 90th-minute goal by Kevin Rodrigues gave 10-man Eibar a 2-1 victory over Valladolid in a match between winless teams.

Eibar earned the points despite playing a man down from the 73rd because of a red card for midfielder Pape Diop. The visitors opened the scoring with Esteban Burgos converting a penalty kick in the 29th, but Toni Villa equalized for Valladolid in the 37th.

Eibar had opened with a home draw against Celta Vigo before losing three straight. Valladolid, owned by former Brazil great Ronaldo, was coming off two draws and two losses in its first four matches to start the season.

In a match between promoted clubs, Elche and Huesca played to a 0-0 draw.