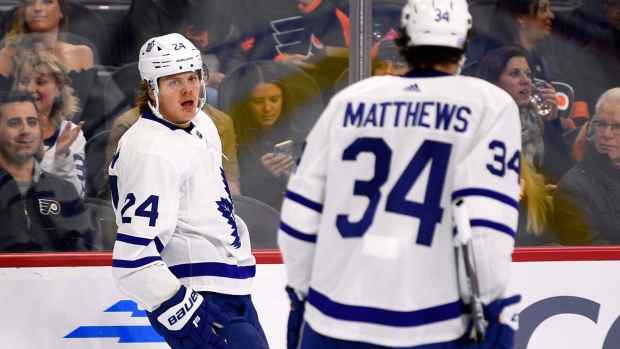 TSN Toronto reporter Kristen Shilton checks in daily with news and notes on the Maple Leafs. The team held an 11 a.m. team meeting at Scotiabank Arena, ahead of facing the Buffalo Sabres tonight at 7 p.m.

When Maple Leafs’ head coach Sheldon Keefe moved Kasperi Kapanen onto Auston Matthews’ line with William Nylander last week, he thought it might ignite both Kapanen individually and that unit as a whole.

He’s still waiting on them to catch fire.

“It hasn’t happened yet, no,” Keefe said after the Leafs’ team meeting on Tuesday, ahead of facing the Buffalo Sabres. “We haven’t seen that line take off here yet. We’re hoping that it can happen, it has the ability to. It is three very good players. We've seen with Matthews and Willy, they’ve been great for us a lot of the time since I’ve been here. We think Kappy has a lot of things that he can bring to that line to help it go. It just hasn't quite happened yet, so it’ll get another chance here today.”

When Matthews and Nylander have been at their best previously, it was Andreas Johnsson flanking them on the left side. But Johnsson has been unavailable since suffering a leg injury on Dec. 4, and Keefe’s attempts at replacing him – first with Pontus Aberg and now Kapanen – have yielded few results.

The unit has recorded zero points since Kapanen joined the line last Tuesday in Calgary, and Matthews admits they “can be a lot better” as a group.

On top of not generating many points, Matthews also saw his ice time hit a season-low on Saturday in Edmonton, clocking in at just 14:34 compared to his average of 19:57.

Keefe admitted it was “a little bit of both” how Matthews has played lately and how the Leafs’ bench was managed in Edmonton that led to the decision.

“There are a lot of circumstances in the game,” Keefe explained. “I think there was about 55 minutes or so that we were leading the game, and then in addition to that, there’s no power plays in the game, and then the [Alex] Kerfoot line was outstanding for us [scoring two goals]. So, all those things, plus I had intended on utilizing our fourth line more in that game, just being the fourth game in a long road trip.”

Now that the Leafs are back home, Matthews and company have a clean slate to try and find their groove. Matthews has produced in the past against Buffalo, notching 15 points in 13 career meetings against them.

“I think it's always a work in progress,” Matthews said of fine-tuning his game. “But I think especially when you come in and you're playing centre, you're always going up against some pretty good players with experience. So I think your play away from the puck is extremely important, something that I've had to learn and grow through, especially my first couple years and it's still a work in progress.”

While Matthews has been navigating a rough patch, his former U.S. National Team Development program teammate and good friend Jack Eichel has taken the NHL by storm.

The Sabres’ captain has 23 goals in 34 games this season, five off his previous career-high set in 77 games last season, and is riding a 16-game point streak into Tuesday’s matchup.

“He's obviously been on fire,” Matthews said. “He's extremely confident to begin with but when you're really feeling it like that, every time you touch the puck, you feel dangerous, you feel like the puck is going to go in. Their team has been playing well in general, but he's obviously been at the forefront of that and leading them, so he's a guy we have to watch out for tonight and make sure we limit his time and space.”

Shutting down Connor McDavid and Leon Draisaitl on Saturday gives Toronto confidence that it can be done. Edmonton’s dynamic duo managed just one assist between them against the Leafs’ swarming defence, and that’s where the Leafs intend to pick up again when Eichel is on the ice.

“Certainly there are some good similarities with the way we played, especially defensively,” said John Tavares. “We want to build off last week and being back home and keep the momentum going and obviously earn key points so we have to be aware of their skill, their talent. They're playing some good hockey and they're competing hard, so it should be a good game.”

Eichel isn’t impervious to the accolades he’s earning from around the league, but the 23-year-old has learned the hard way not to let runs of success go to his head. Around this time last season, the Sabres were in a playoff position after completing a historic 10-game win streak, but the club still failed to make the postseason.

“I’m just trying to stay even-keeled,” Eichel said. “I think we've battled through some adversity in the middle part of the first half [of this season] here and I think it's made us a better team and I think it started to make us realize what type of team we have to be.”

Buffalo coach Ralph Krueger said the disappointment of last season has stuck with Eichel, and encouraged his new commitment to the defensive side of the puck.

“He’s maturing,” Krueger said. “He's just a world-class athlete and player and is able with any spaces to make something out of it. There are very few players in the league that are a threat one-on-one and he's definitely at the top of the pile. Like all of us, we're keeping our picture really small. We're working day-to-day, and not so worried [about] all the white noise that there is.”

“I'm just trying to put more of an emphasis on it,” Eichel added of his 200-foot game. “It's important in this league, especially some of the matchups, some of the guys you're playing against are obviously really highly skilled offensively, so we're just trying to put more emphasis on my defensive game and being more responsible. I think through that I've had a little more success with the puck and offensively.”

At this time last year, Justin Holl could barely crack the Leafs’ lineup, living out most of his days as a healthy scratch.

Now Holl is a stalwart on Toronto’s blueline, skating on the team’s shutdown pairing with Jake Muzzin and inspiring teammate Travis Dermott with his play against McDavid and Draisaitl on Saturday.

“I think especially you look at Holl and how he played against [Edmonton’s] top skill and I think he really shined,” Dermott said. “He did a great job, and I think that's hopefully going to push him into the next level of confidence and keep him playing better and better game after game like he is…I'm looking up to [him and Muzzin] defensively especially and I definitely learned a lot watching them in that game.”

Dermott had been Holl’s partner earlier in the season, before former head coach Mike Babcock began trying Holl with Muzzin in early November. The duo clicked quickly and has been providing the Leafs with a consistent pairing Keefe can rely on with the toughest of matchups.

“Even on the road, when we didn’t have last change, Muzzin and Holl were the guys we were trying to get out in those situations [against top players] whenever possible,” Keefe said. “We’re going to be conscious of it [against Buffalo], but we’re not going to compromise our own flow [either] and be mindful of that. We’ll trust our team structure and our team defensive play against anybody.”

Tyson Barrie will be back in the Leafs’ lineup on Tuesday after leaving Saturday’s game in the first period with an ankle injury. Barrie blocked a shot off his skate in the opening frame and said on Monday he didn’t feel comfortable enough to get back in that game, but was hopeful he wouldn’t be held out another night.

The Leafs had also anticipated having Trevor Moore back in the lineup on Tuesday after he missed the previous 13 games with a shoulder injury. But Keefe said in a pre-game interview with TSN that Moore was bumped in practice on Monday and informed the team late Tuesday afternoon that he wasn't feeling right. Toronto put him through concussion protocol and will hold the winger out another game for precautionary reasons.