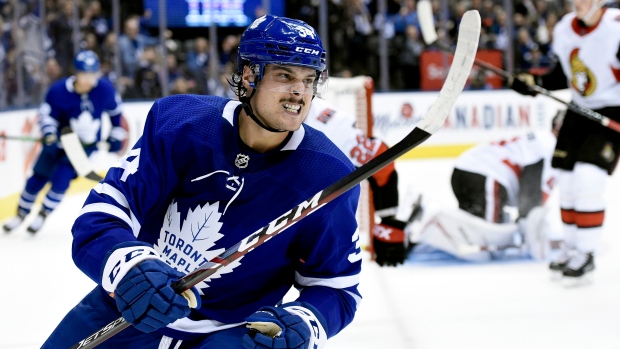 The Maple Leafs and Bruins (optional) skated at Scotiabank Arena ahead of tonight's game.

The Maple Leafs may be struggling right now, but Auston Matthews is not.

"I thought some of the things he did the other night were the best he's ever done it," said coach Mike Babcock. "His speed through the middle, his track, his transition, his 200-foot game, he's skating as good as he's ever skated and that means you have the puck all the time."

Matthews leads the Leafs with 13 goals and 26 points this season.

It sure sounds like Babcock plans to match Matthews against Bergeron tonight even though Boston's top line was dominant against Toronto's top unit last month at TD Garden. After that game, Matthews called out his own performance and that of his team. He also expressed how difficult it is to play against Brad Marchand, Bergeron and David Pastrnak.

"They kind of do things differently as far as like offensive zone," Matthews explained after the 4-2 loss on Oct. 22. "For us, they kind of preach a guy in the slot, a guy on the net and then a guy in the corner, but they're kind of all over the place, their D get active and it's really hard to defend and they obviously do a good job of finding each other. There's a reason they're the top line in the league, been the top line in the league for the last couple years now so it’s always a challenge going up against them, especially in the face-off circle against Bergeron, but it doesn’t matter who you’re going up against you got to find a way."

"Some nights it doesn't go your way," Babcock said, "some nights the other team feeds you your lunch and then you come back, you regroup, you get better and you go on from there. Some of those lessons are the best things for you."

Tonight, Matthews says he'll have to have his head on a swivel in the defensive zone.

"It's tough when they got all five guys moving," he explained, "just who you got to check or who you're guarding almost. They do a good job of just always being in constant motion and they find each other in certain areas and they can obviously put the puck in the net."

What makes Boston's top line so good is they match their talent with work ethic.

Boston ranks third in power-play efficiency (30.5 per cent) and went 2/7 in two games against the Leafs.

The Leafs penalty kill, meanwhile, is slumping having allowed 10 goals in the last eight games falling to 24th in the league.

The Leafs announced Alexander Kerfoot will be out indefinitely after undergoing surgery to repair facial dental fractures. The injury was sustained on a big hit from Jeff Carter in a game against the Kings on Nov. 5.

"He had been under some pain and obviously he didn't think it was enough pain, but when the pain wouldn't go away, we had to deal with it yesterday," Babcock said. "I don't know what the timelines are, I don't really know."

"Yeah, that's a great question," the coach said. "I didn't have the courage to ask, to be honest with you."

Kerfoot is tied for third on the team with five goals this season. What will the Leafs be missing most with Kerfoot out?

The injury to Kerfoot has opened the door for Jason Spezza to return to the lineup after sitting as a healthy scratch in four of the last five games.

"It's a new situation," the 36-year-old said of his in-and-out status on the fringe of the roster, "but I just make sure I put the time in on the days I'm not playing ... doing a little extra, just trying to stay on, keep moving. It's important, because when you get a chance like this to play you have to stay sharp."

Spezza's longest stretch in the lineup came after captain John Tavares broke his finger and he played four straight games (Oct. 25-29). With Mitch Marner (high ankle sprain) also out, Spezza may now get a longer look. The former Senators captain says the hardest part of being out is maintaining your touch and he believes getting in a string of games will help.

"You want to get in a rhythm so it's a good opportunity for me to have a good impact in the lineup," Spezza said.

Toronto is going through some adversity having failed to live up to high expectations through 20 games and Spezza could be a calming influence.

"He's been fantastic," said Tavares, "just that leadership and the positivity that he brings in the locker room and the passion he still has for the game. With all that he's accomplished and all that he’s been through in this league that he's come here to want to play a role and want to help this team, I think that's real motivating for our group and a great sign of leadership from him. I know he's excited to get every opportunity that he gets."

Spezza doesn't see this as just an opportunity for himself, but rather for the team as a whole.

"It's such a long season you're going to have times where your team is going to go through injuries," he noted, "that's why you have depth and it gives opportunities to different guys, but also as a team it can bond you and you can rally around that and then when you’re healthy you can have even more confidence so a big test for us."

Pastrnak leads the NHL with 16 goals.

"His creativity is what sets him apart," said Bruins defenceman Charlie McAvoy, "and just his, I guess, I don't know if 'courage' is the right word, but confidence is probably the best word. He goes out and does it. If he feels like going between the legs on somebody he does it. Whatever's going through his head, it's what he does out there and it's been working for him."

Two of Pastrnak's goals have come against the Leafs. On Oct. 22, he went between his legs to beat a surprised Michael Hutchinson.

"Going through the legs is the last thing you expect," the goalie admitted afterwards.

What's the secret ingredient to Pasta's success this season?

"Oh man, I don't know if I have one thing," said Bergeron. "I think he's been developing as a player over the course of the last few years and it's been impressive to watch. I think this year he's just maturing, he's just learning the game even more away from the puck. He obviously scores a lot of goals, but it's the way that he scores them. He's on the puck at all times, he wants to have it on his stick, he wants to get to those dirty areas to score those goals. It's not always the same goals all the time. He scores from close to the net, he scores away and on his one-timer as well. He's an amazing player, he's developing well and he's probably, obviously, our best player for the start of the year."

Pastrnak has owned the Leafs in his career with 42 points in 31 games (playoffs included).

What a goal by Pastrnak on the PP. 1-0 Bruins. #LeafsForever pic.twitter.com/BqJxdAOJ1F