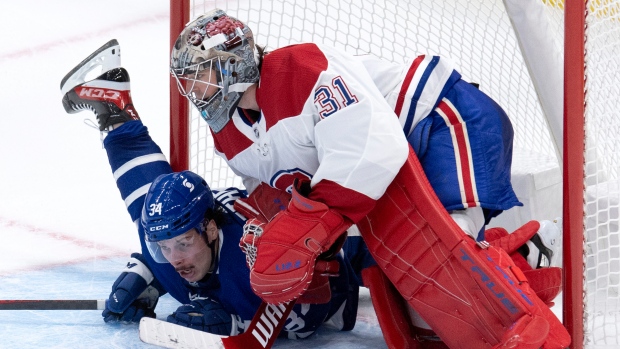 TSN Toronto Reporter Mark Masters reports on the Maple Leafs, who practised at the Ford Performance Centre on Thursday before travelling to Ottawa for Friday’s game against the Senators.

Auston Matthews was in discomfort at the end of regulation on Wednesday night after absorbing a couple cross-checks to the back from Montreal Canadiens defencemen Shea Weber and Ben Chiarot.

"I think he just took a bit of a stinger," coach Sheldon Keefe said after the game.

Matthews didn't miss a shift and assisted on the Morgan Rielly goal in overtime. And the centre was back on the ice looking like his usual self at practice on Thursday.

Does he want to see referees call more penalties on those type of cross-checks?

"You always want to protect the players. I mean, I guess the guys have a right to defend the net and obviously create that body position and stuff, but you just got to find that happy medium. As far as the penalties and refereeing goes, its just got to stay consistent," Matthews said. "It's just a fine line."

The uncalled cross-checks created a buzz on social media with agent Jeff Jackson wondering why the NHL doesn't do a better job protecting its star players much like how the NFL protects quarterbacks. Jackson represents Connor McDavid and his Wasserman/Orr Hockey Group also counts Matthews among its clients.

Great to see NHL hockey back last night. Such amazing athletes & so much speed & skill in the game now. But watching the abuse that star players take is hard to watch. Felt like the 80’s with the cross checks in the back & the hacking & slashing. NFL protects QB’s? Why don’t we?

"There's certainly got to be a line in the sand somewhere," said John Tavares, who's faced his share of abuse over the years. "It's a highly contested area and the defending team has the right to defend it, but it certainly gets to a point where, you know, it crosses the line and it should be called and that line should be consistent on a nightly basis."

"Cross-checks are in the rule book, you can just call them," Johnson said on That's Hockey. "You don't have to give the defencemen free reign to chop away in front of the net, because that's the way it's always been."

Pet peeve, it is common place and accepted that Weber and Chiarot can absolutely hammer Auston Matthews in the back in front of the Montreal net but if an offensive player were to commit the exact same infraction they would frequently get a penalty

It’s not a penalty to stand anywhere in the ice. Cross checking someone in the back is, there is actually a rule in the rule book on this. Nowhere does it say that the rules don’t matter in front of the net. And you can use any term you want, I lived it. https://t.co/4hGbIImLPd

"It's very much in the fabric of the sport in terms of the competitiveness and how hard it is especially around the nets," noted Keefe. "The NHL's made great strides to protect the pl​ayers over the years and they will continue to look at things along the way that can help make it safer not only for stars like Auston, but for all players at all ages."

Matthews logged just over 25 minutes on Wednesday in his first meaningful game since Aug. 9.

"For me, physically, I felt good," he said. "Throughout the game I started to feel better and better."

Matthews spent 40 seconds, two shifts, on the penalty kill. In the first period, Matthews lost the faceoff and was forced to confront a Weber shot at the point. He seemed unfazed when asked about his mindset in that spot.

"Just try and take it away, I guess," he said. "You do a pre-scout and just try to make sure you're in a good position. Obviously, he's got the big shot and you want to try and that take that away and take the puck out of his his hands and not let him tee off on our goalie."

The Leafs believe Matthews is ready for more responsibility when it comes to the defensive side of the game. They are looking for him to win some shorthanded draws on his strong side, but also trust him to be out there should the puck stay in the zone.

"In the practices, he has been progressing well with it," said Keefe. "He has had limited reps. One of the biggest challenges is getting the proper reps. You want him to practice the power play and to be able to get reps on both sides is challenging."

On his second penalty-kill shift Wednesday, Matthews was able to win the faceoff and exit the ice.

"It is going to have to be something we continue to develop over time as we find him the reps both in practice and in the games," said Keefe.

At even-strength, 41-year-old Joe Thornton has joined Matthews on the top line with Mitch Marner.

"He's easy to play with," said Matthews. "We've only been playing with each other for a couple weeks now so obviously we're still trying to adapt and learn, but so far we’ve created some good chances, communicating a lot and I think it's really positive ... trying to create little wedges, two-on-ones, those little give-and-go plays."

Thornton averaged 15 minutes and 30 seconds of ice time per game last season with San Jose, but clocked in at 17:30 in his Leafs debut.

"With who he is playing with, he is having to do a lot less work," Keefe pointed out. "He is not playing centre, first of all. There is a lot less ground to cover on the ice. With Auston and Mitch and the way they work and have the puck, I don't think the minutes are as difficult for him as they maybe would have been in San Jose."

"He looked fresh and like he had legs to me all the way throughout the third period," Keefe added.

The Leafs play music during some drills at practice and at one point Thornton seemed particularly pleased by the song selection on Thursday pumping his fist at video co-ordinator and statistical analyst Jordan Bean, who serves as the deejay.

"I watched him again in practice and he is one of the first guys out there on the ice with lots of jump," Keefe said.

It was Tavares and linemates Jimmy Vesey and William Nylander who led the way in Wednesday's comeback win. Nylander had a pair of goals and assisted on Vesey's game-tying goal.

"He's developed well and is starting to put everything together," said Frederik Andersen. "He wants to be a great player and it shows. Yesterday he came out and made a statement right away, which is great for us."

Willy with the first Leafs goal of 2021 🙌#LeafsForever pic.twitter.com/YBaRpL9NEs

Nylander broke out with 31 goals in 68 games last season and the Leafs believe he's capable of even more.

"He's come in really motivated and driven to continue to be a difference maker and to take it to another level," said Keefe. "We've had a lot of pretty blunt discussions about where he needs to continue to get better away from the puck. He's bought into that. I think it goes hand-in-hand, when he’s competing away from the puck, he's more engaged when he has it, he's more involved in the game."

"Willie, obviously, can score," Vesey said. "He's really competitive, too, which is something that I didn’t necessarily know about him. Just from going against him in some of the battle drills, he's got some fire to him."

Toronto's tying goal came after a Jonathan Drouin clearance bounced off referee Kendrick Nicholson and right to Nylander, who quickly set up Vesey.

"It's nice to start off the season with a nice bounce," Nylander said with a smile. "I usually like to think when a team is working hard those bounces will come your way ... We were heavy on the forecheck there."

"It felt really good, I'll tell you that," Vesey said with a smile. "Last year, I think it took me 20 games to get a goal so it's nice to get off to a little bit better start. Definitely takes some pressure off."

Vesey didn't score until his 21st game last season with the Sabres.

Among the newcomers, Wayne Simmonds made the biggest splash on opening night by fighting Chiarot in the second period with the Leafs trailing 3-1. Nylander called that moment the "turning point" while noting his team had been playing "slow and soft" to start the game.

"It just really encouraged the whole bench," Matthews said. "It got everybody going. Right after that the momentum really shifted and that's the kind of teammate and guy he is."

Simmonds recognizes that his team isn’t playing good enough, fights a guy and then calls out his team on the way to the box. That’s how you earn the respect of teammates. https://t.co/HSCgUyAQH3

Andersen allowed four goals on 32 shots against the Canadiens.

"I felt all right," he said. "I liked how I was moving in the crease. I felt comfortable. It's just a few of the goals were see-through pucks and tricklers through the body ... As we get more games in, I know I'll be coming up with those saves."

The condensed schedule this season will be a challenge in some ways, but Andersen likes the fact he will be facing the same opponents so often.

"It's something that builds up extra emotion in the following game," he said. "That can be interesting for fans when they're back in the building. It will be less travel throughout the year. I don't see any reason not to try it out."

The Leafs will play in Ottawa on Friday and then again on Saturday.  ​

"We looked at it and for the 28 road games we play this season, we fly 17 times," Keefe noted. "That is not too bad. There are added bonuses to that."

Keefe said the Taxi Squad players will accompany the team to Ottawa, but no lineup changes are expected for Friday's game.