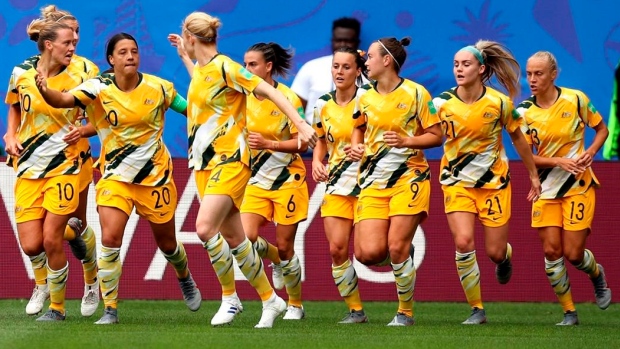 Australia's path to the Women's World Cup was turbulent even before its upset loss in the opening round.

That loss to Italy in stoppage time was a terrible start for a team that some consider one of the tournament favourites. The Matildas feature Sam Kerr, their back-flipping global superstar captain, and the forward has urged her teammates to tune out criticism that followed the loss to Italy.

"Ah mate, It's just outside noise, we don't listen to the haters. Look at that performance coming back from the deep," Kerr said. "I love these girls, they're something else."

Italy scored in stoppage time, an upset considered the surprise of the World Cup. But Australia beat Brazil 1-0 to earn a spot in the round of 16 and closes Group C play at Stade des Alpes in Grenoble, France against Jamaica on Tuesday.

Kerr has been feisty since arriving at the World Cup and the openly gay player used Twitter this week to reveal a homophobic message she had received. Kerr has been with the national team since 2009 and has 32 goals in 79 games.

But she hadn't scored in a World Cup until the opener when she put the Matildas in front of Italy with a goal in the 22nd minute. She celebrated by punching the corner flag in a tribute to Australian great Tim Cahill.

But Barbara Bonasea scored a pair of goals, including the game-winner in stoppage time, to give Italy the win and stun Australia.

The Italy loss was one Australia didn't need after months of controversy surrounding the team. The Australian federation dismissed coach Alen Stajcic in January after an internal review revealed a "toxic" team culture. Stajcic denied any issues.

He was replaced by Ante Milicic, an assistant on Australia's men's team, who had just a half-dozen exhibition games to prepare with his new team.

After the loss to Italy, Milicic suggested that his team would just have to advance "the hard way." Indeed, the match against Brazil wasn't easy.

Australia fell behind two goals before rallying for a 3-2 victory on a controversial own goal. The Matildas became just the second team to win a World Cup match after going down two goals.

Afterward, Milicic addressed the critics of the team, too.

"The important thing is that we, as a staff, give these girls every opportunity to do well in this tournament," he said. "The outside noise stays out."

Chloe Logarzo suggested it's characteristic of her nation to never quit, and to ignore their detractors.

"The Australian mentality is to come out swinging," Logarzo said. "We like a good fight."