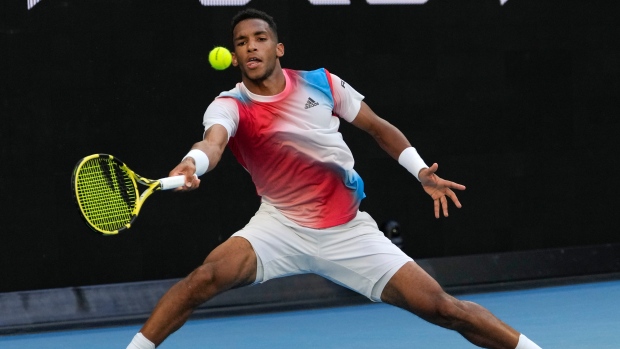 Felix Auger-Aliassime says he is seeing improvement in his game as the Australian Open progresses and now will face his toughest challenge yet as he takes on world No. 2 Daniil Medvedev in the quarter-finals.

The 21-year-old Canadian – seeded ninth in the tournament – has dropped all three previous matches to Medvedev, including a recent loss at the ATP Cup and in the semifinals of the US Open last year.

However, Auger-Aliassime, who has now reached at least the quarter-finals in three consecutive Grand Slam events, is looking forward to the test that awaits him against the second-seeded Medvedev.

“I have to stick to my plan and stay close to the battle,” Auger-Aliassime said. “It’s not going to be easy. Odds are I won’t win in straight sets. If it happens great. I need to stay there, I need to stay composed, stick with him and see how I can change a few patterns that I maybe have not done well enough in the past meetings.

“But it’s always interesting to play Daniil and see where my game is at against one of the best in the world. He’s the favourite now to win here, so I’m going to give myself the best shot to try and win.”

Medvedev defeated Aliassime in straight sets in the 2021 US Open semis and went on to capture his first Grand Slam title. The 25-year-old Russian fell to Novak Djokovic in the 2021 Australian Open final and is considered a favourite to win this year.

Chris Clarey of the New York Times offered high praise for Medvedev, but told TSN he is expecting a closer match between Auger-Aliassime and Medvedev this time around.

“Felix had some tough duels early in the [Australian Open] and I think he’s building confidence," said Clarey. “Medvedev is the gold standard on hardcourts right now, he deserves to be, he’s beaten a whole bunch of different game styles this week and also at the US Open, so you can’t not favour him.

“I hope it will be a better match and I think it will be than the straight-sets defeat at the US Open for sure.”