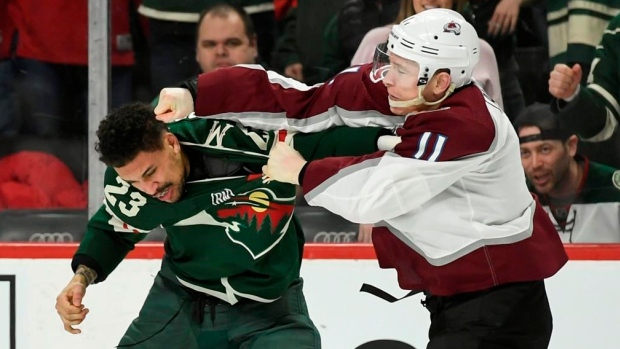 ST. PAUL, Minn. — The Colorado Avalanche have little margin for error as they chase a playoff spot with nine games remaining.

They got a much-needed victory Tuesday night against the team just ahead of them in the standings.

Philipp Grubauer made 36 saves to lift the Avalanche to a 3-1 win over the Wild on Tuesday night in a game that had playoff implications in Minnesota and elsewhere.

"It's pretty much Game 7 from here on out and that's how we're attacking these last nine games," Jost said.

Minnesota remained one point behind the idle Arizona Coyotes for the second wild-card spot in the Western Conference, while the Avalanche got within one point of the Wild and two of Arizona. Colorado also has a game in hand on Minnesota.

"This one tonight, I think for us, it was as close as you can get to a must-win this time of year," Avalanche coach Jared Bednar said. "I don't know that they needed to win it, but we certainly did to try and get closer and inch closer because the runway's running out."

The result also clinched a playoff berth for the San Jose Sharks, who are second in the Western Conference.

Colorado struck first with a tally by Barrie, his third goal in his last two games. Barrie fired a centring pass from Carl Soderberg to beat Dubnyk with 14:57 left in the first period.

The Wild evened things early in the second period on a power play. Parise deflected a shot from Ryan Suter that slipped past Grubauer 1:52 into the period. It was Parise's team-leading 26th goal of the season.

The Avalanche appeared to take a 2-1 lead midway through the second on a wraparound goal by Colin Wilson. But the goal was waved off for goaltender interference after Minnesota challenged the play.

Colorado went ahead minutes later when Jost found space on a breakaway and fired a backhand shot past Dubnyk. It was Jost's first goal in 10 games and his fourth since being recalled from the minors in mid-February.

Minnesota had several chances to tie the game in the second, including a few looks by Jason Zucker. The Wild forward missed a wide-open net on a backhander and had another shot just miss the net as it slid through the crease.

Grubauer made perhaps his best save of the night with just over eight minutes to play in the third period. The Avs goalie blanked Minnesota's Pontus Aberg to preserve Colorado's lead.

"We need to score goals if we want to win games and we had some good chances," Wild centre Eric Fehr said.

Colorado faces Dallas — currently the top wild-card team in the West — on Thursday before back-to-back games against Chicago.

Minnesota plays four of its next five games on the road. The Wild are 19-15-2 away from St. Paul this season.

Avalanche: At Dallas on Thursday night.

Wild: At Washington on Friday night.