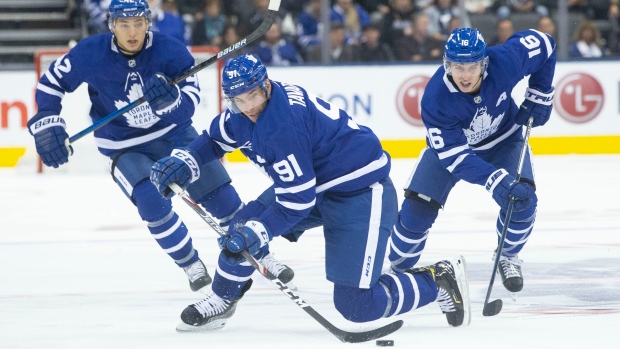 TORONTO – It was just a small change that coach Mike Babcock made late in the first period of Tuesday’s game against Minnesota, swapping Trevor Moore for Kasperi Kapanen on his team’s top line with John Tavares and Mitch Marner.

But that tweak sparked the Maple Leafs to catch fire, and they exploded for a four-goal second period that carried into a 4-2 victory over the Wild. Tavares and Marner combined for four points on the night, while Morgan Rielly chipped in four assists in the middle frame, tying Rick Vaive’s franchise record from 1984 for most helpers in a single frame.

“I've just been watching [that Tavares line] and noticed that no one was going,” Babcock said after. “We just tried it [with Moore] and it seemed to be okay, so we just stayed with it. [Then] the first 15 minutes of that second period was real good. We played right; it was good.”

Tavares’ group with Marner and Kapanen hadn’t been clicking since the season started, producing just seven total points at even strength through six games prior to Tuesday. All three players expressed continued hope that things for their line would improve, but another ineffective first period against Minnesota forced Babcock’s hand on trying something new.

“I was a little surprised,” admitted Moore of getting the call to move up. “But wherever you play in this lineup you’re going to be in a good spot, so you just keep working.”

The game had already started out in predictable fashion for Toronto when it gave up the opening score to Luke Kunin after previously failing to convert on an early power play chance. That marked the sixth time in their first seven games this season that the Leafs have ceded the first goal in a game.

Toronto continued to be frustrated by the Wild until late in the period, when Babcock had finally seen enough to shuffle the deck. Less than two minutes into the second, his decision was already paying dividends when Moore assisted on Tavares’ sharp-angle shot past a screened Devan Dubnyk to tie the game 1-1, and pocket just his second goal of the season.

That would start a run of four goals scored in 11 minutes for the Leafs, who were looking to win just their second home game of the year.

“I don't know if I had anything to do with that, I think John was a ticking time bomb; he was gonna start getting some bounces here and it was nice,” Moore said. “A little learning curve there [moving on their line], but it was good. They hope that I’m just going to bring something similar to what [injured winger Zach Hyman] does, go retrieve the puck and get to the net, leave most of the skill stuff to them and just do the work.”

Tavares didn’t think Moore had any trouble finding his way and fitting in on the fly with a new pair of linemates.

“I thought Moore made a good play [on my goal] when he came around, let the puck come to me,” said Tavares, who finished the game plus-2 and 12-for-15 in the faceoff dot. “He plays with speed, very smart player, plays with good energy, he's tenacious and he's got good touch, reads the play well. If that's the way it is going forward we'll just continue to build on it.”

Once Tavares had knotted the score, Marner went to work giving Toronto its first lead. The Leafs hadn’t been pleased with their power play going into Tuesday’s game, lamenting their poor zone entries in particular, and after one lacklustre man advantage in the first period had come and gone, Marner finally capitalized on their second with his first goal in five games.

The winger added two more assists before the end of the period, starting with a slick feed to tee up Andreas Johnsson’s power play goal, and then hitting Auston Matthews with a pass through the slot in front of Dubnyk to help send Toronto into the third period with a commanding 4-1 lead.

Marner ended the night with three points, while the Leafs went 2-for-3 with the extra man. Gerald Mayhew added a late third period goal for the Wild to cut into Toronto’s lead, but overall, Marner was pleased with how they turned things around.

“We wanted to get our power play going tonight – I think that was huge for our team, getting pucks back, getting pucks to the net, screening, and not giving up on second opportunities,” Marner said. “We stayed patient with our game plan and that’s what we're just going to keep doing going forward.”

And if the future includes keeping Moore on his line, for the second half of the Leafs’ back-to-back on Wednesday in Washington and possibly beyond, the results from Tuesday’s showing suggest to Marner they’ll be just fine.

“Anyone on this team can play fast, so we knew that wasn’t going to be an issue,” Marner said. “You’re trying to find chemistry with him right away and he was getting open. You're talking a lot. We're able to move the puck around pretty well and we just got to keep doing that.”