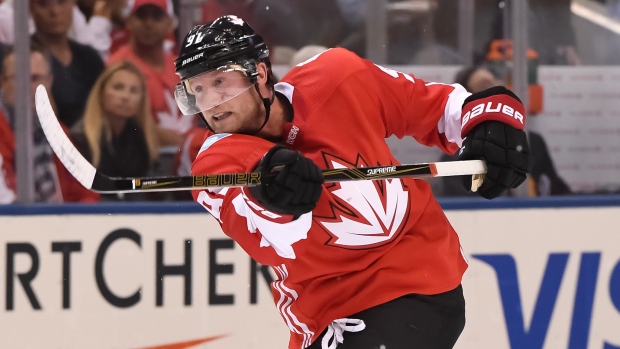 Against Team USA, Ryan O’Reilly’s unit chipped in twice. Jonathan Toews’ line picked up Canada against Team Europe on a night with nothing on the line.

So Mike Babcock had a message for Ryan Getzlaf’s line against Team Russia: Your turn.

“We gave ‘Getzy’ the night off (Wednesday), he should be fresh,” Babcock said. “He should be next.”

Flanked by John Tavares and Steven Stamkos, Getzlaf’s line has been one of Canada’s most dynamic so far in the World Cup of Hockey. They just have little to show for it in terms of goals. They’ve combined for five assists in three games, but no goals by that line.

Stamkos, in particular, hasn’t been able to buy a goal. He’s been robbed on at least five point-blank, memorable chances in this tournament.

Stamkos hasn’t scored a goal since March 28, nearly six months, in his second-to-last game before a blood clot was discovered in his shoulder area. It is a prodigious goal drought for perhaps the second greatest scorer of this generation behind Russia’s Alex Ovechkin, whom he will face Saturday night.

Consider: Stamkos has been blanked on 24 shots in six World Cup of Hockey contests for Canada, including the three pre-tournament games. That means he would have to score on each of his next five shots in succession just to reach his NHL-career shooting average of 17.2 per cent.

“Stammer’s had tons of chances,” Babcock said Saturday morning. “Just the math, over time, sorts itself out to score - so we’ve just got to stay with it. They’ve been good. They’re good players. Tavares has been a real good player for us. ‘Getzy’ is heavy with (the puck) and knows how to play without it. That’s a good group for us. We need that group to be dominant here.”

That Stamkos is averaging four shots per game for Team Canada is just one indication of how dominant they have been at times.

“They’re definitely around it, for sure,” Patrice Bergeron said. “They’re playing great. I think everyone is contributing to the success of this team. It’s not always about goals and points, it’s also about positioning and defending a goal and being committed to the success of the team - and I think that’s what we’re seeing from everyone.”

Stamkos, 26, said that buy-in has been the most eye-opening thing really being part of Team Canada at the best-on-best level for the first time.

“I know a lot of people say it, but they don’t necessarily mean it that it doesn’t matter who gets on the scoresheet,” Stamkos said this week. “It really doesn’t matter. That’s why Canada has been so successful in these tournaments. With the amount of talent, you’d say there’s only one puck out there, but it truly is ‘check your ego at the door.’ … We don’t care who scores, who doesn’t. We’re going out and winning this game and we don’t care how we do it.”

That doesn’t mean Team Canada couldn’t use the help, particularly in a single game elimination semifinal. It’s the perfect time to break through.

“A couple of guys just can't seem to find the back of the net yet,” Jonathan Toews said. “But we'd like to think that for the most part, they're saving those goals for the big games.”