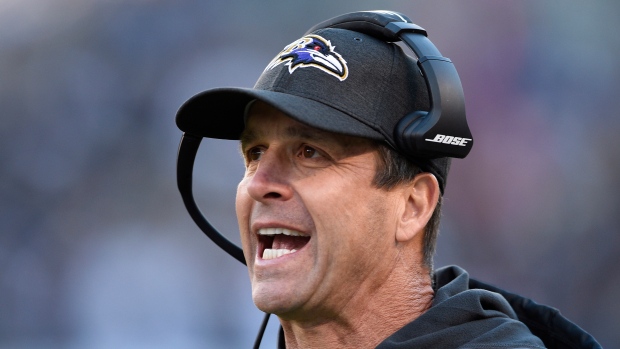 Baltimore Ravens head coach John Harbaugh has expressed his concerns around the security of the NFL's plans for a virtual draft later this month.

The NFL confirmed Monday that the 2020 NFL Draft will take place April 23-25, with team personnel across the league working from their homes. Harbaugh is worried the format could leave teams vulnerable to having information stolen.

"It's a big concern," Harbaugh said, per ESPN. "Hopefully we'll be okay. I really wouldn't want the opposing coaches to have our playbook or our draft meetings. That would be preferable, if we can stay away from that."

"I have more confidence in Zoom than I do in Ozzie [Newsome, executive vice- president], John, Steve [Bisciotti, owner] and Dick [Cass, team president], with a copy of our draft board that they just leave in the car on their front seat or something like that," DeCosta said.

The 2020 draft was originally scheduled to be held in Las Vegas prior to the NFL cancelling public events due to the COVID-19 pandemic. NFL commissioner Roger Goodell said Monday the league could not " identify an alternative that is preferable" to the virtual format.

“We have made this decision for several reasons,” Goodell wrote. "All clubs will not have access to their facilities, which is contrary to the fundamental equity principle that all clubs operate in a consistent and fair way.

“Moreover, we want all NFL personnel to comply with government directives and to model safe and appropriate health practices. Our staff will carry out its responsibilities in the same way, operating in separate locations outside of our offices. And after consulting with medical advisers, we cannot identify an alternative that is preferable from a medical or public health perspective, given the varying needs of clubs, the need to properly screen participants, and the unique risk factors that individual club employees may face.”