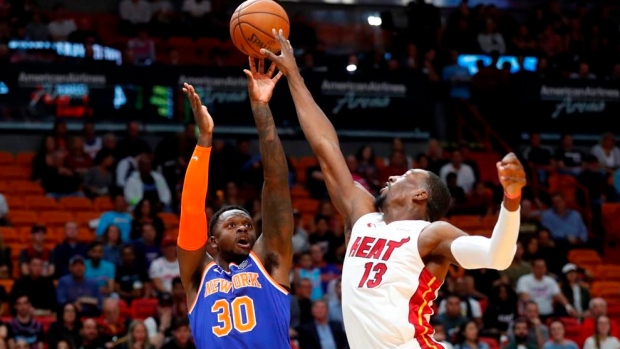 Dragic had 18 points and eight assists in his return from a strained groin, Bam Adebayo led Miami with 20 and the Heat had no trouble on the way to beating the New York Knicks 129-114 on Friday night.

Miami’s starters got the fourth quarter off. Dragic played 24 minutes after being sidelined for nine games.

“You need to get back and try to fit in again with the system," Dragic said. “And I feel like I didn't miss any games."

Duncan Robinson scored 18 for Miami on 6-for-10 shooting from 3-point range. Kendrick Nunn scored 15, Derrick Jones Jr. had 14, Tyler Herro finished with 12 and Kelly Olynyk added 10 for the Heat.

Miami led by as many by 34 and posted its sixth wire-to-wire win of the season.

The Heat won easily and Jimmy Butler was called upon to take only three shots. Butler finished with nine points and eight assists in 28 minutes — his third-lightest night of the season, and after a stretch where he averaged nearly 40 minutes in Miami’s last nine games.

“Jimmy really facilitates a mindset for guys to grow because he’s such a giving and unselfish player," Heat coach Erik Spoelstra said.

“They were getting everything they wanted," Portis said. “They were getting lobs at the rim, open 3s. This wasn't our best game defensively and they exposed us a little bit on the defensive end, but the best part about the NBA is we have a game tomorrow and we can go there and try to correct it.”

It was the first meeting between the clubs since the Knicks fired coach David Fizdale and replaced him with interim coach Mike Miller. Fizdale is a former Heat assistant and a close friend of Spoelstra, who still is disappointed about New York’s decision.

“They hired him to do a job,” Spoelstra said. “It takes time to build culture and build something, which we’ve done as well. It takes time. It takes a great deal of stability from the people you work for, which I’m so grateful we have here. I just think it stinks.”

New York allowed the Heat to shoot 56 per cent.

“They put a lot of pressure on our defence," Miller said.

Knicks: RJ Barrett had only two points on 1-for-10 shooting. ... Reggie Bullock (cervical disk herniation) and former Heat guard Wayne Ellington (sore left Achilles) were ruled out. Allonzo Trier was questionable with concussion-like symptoms but played in the fourth quarter, logging 10 minutes. ... Elfrid Payton reached 29 consecutive assists before finally committing his first turnover since Dec. 11; that was the longest such streak in Knicks history since play-by-plays began being charted in 2000-01.

Heat: Miami had assists on each of its first 20 field goals and finished with 34 assists on 43 baskets. Of the 10 Heat players who appeared, nine had multiple assists. ... Justise Winslow (strained lower back) missed his eighth consecutive game citing that issue and was unavailable for the 19th time in Miami’s last 25 games overall.

Knicks assistant coach Kaleb Canales once sought a video internship with the Heat — so he sent weekly letters to Spoelstra, a former Miami video-room guy himself, looking for help and advice. The Heat brought Canales in for an interview, but ultimately hired current Heat assistant Dan Craig instead. Spoelstra and Canales stayed in touch, and Canales eventually got an NBA job. “He’s relentless and he’s been a friend,” Spoelstra said.

The Heat led 39-20 after one quarter and 70-47 at the half. Out of the 152 Heat-Knicks games all-time, including playoffs, those margins — 19 points after one quarter, 23 at the break — tied for the second-biggest leads Miami ever had over New York at that point in a game.