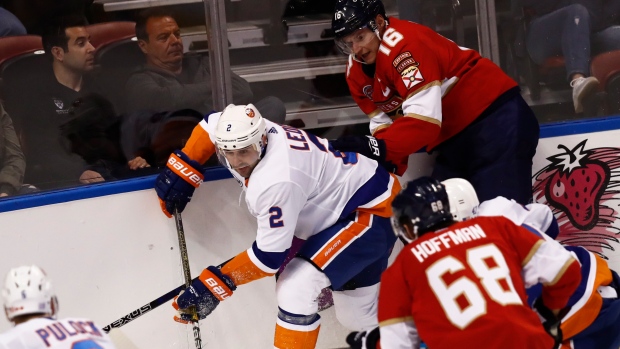 SUNRISE, Fla. — The Florida Panthers are starting to gain momentum.

Aleksander Barkov scored the go-ahead goal in the third period, and the Panthers beat the New York Islanders 4-2 on Saturday night.

Troy Brouwer, Mike Hoffman and Denis Malgin also scored for the Panthers, who won their third straight. Roberto Luongo made 29 saves for his third straight win after missing nearly a month with a knee injury.

"I think we're finding a pretty good rhythm," Luongo said. "Heading into the third period we have that confidence that we're going to pull it out, whether they're tied, ahead or trailing. It's a little bit of the same feeling toward the end of last year and it's just a matter of keeping going here."

Meanwhile, the Islanders are losing steam.

Brock Nelson and Mathew Barzal scored goals for New York, which has lost three in a row after winning its previous five. Robin Lehner stopped 27 shots.

"Tonight, we were in a pretty good spot on the road, tied, just go out there and win a period and win a game," Nelson said. "We weren't able to do it. We want to stop it now and get going."

Brouwer recorded an empty-net goal with less than a second remaining.

The Panthers went ahead 3-2 on a 4-on-3 power play at 4:43 of the third period when Barkov's shot from the left circle beat Lehner, who was screened on the play by Jonathan Huberdeau.

"All I had to do was just put it in because (Huberdeau) was there and made a really good screen," Barkov said.

Nelson put the Islanders ahead 2-1 on his wrist shot from the slot at 8:10 of the second.

"Tonight, we were in a pretty good spot on the road, tied, just go out there and win a period and win a game," Nelson said. "We weren't able to do it. We want to stop it now and get going."

Florida tied the game on Hoffman's goal with 45 seconds left in the second. Hoffman backhanded a pass from behind the net that deflected off the skate of defenceman Ryan Pulock into the net, extending Hoffman's points streak to 11 games.

The Panthers took a 1-0 lead on Malgin's goal. Jared McCann passed from behind the net out to Malgin, who pushed the puck past Lehner at 6:18 of the first. The goal was Malgin's first of the season.

The Islanders tied it just over a minute later when Barzal flipped a backhanded shot past Luongo on a breakaway. Nelson leads the Islanders with eight goals.

"We were up 2-1, then gave up a late goal, then 2-2. They get the power-play goal and all of a sudden you're chasing them," Islanders coach Barry Trotz said. "We really couldn't generate much after that goal."

NOTES: The Panthers hosted Bill Torrey Tribute Night for the late Hall of Famer. Torrey, who died in May 2018, was the general manager of the Islanders from their inception in 1972 through 1992, a run that included four Stanley Cups. He then was president of the expansion Panthers from 1993-2001. ... Panthers forward Evgenii Dadonov's assist on Hoffman's goal was his 100th NHL point and extended his points streak to 10 games. ... Islanders D Pulock and C Barzal each played in his 100th NHL game.