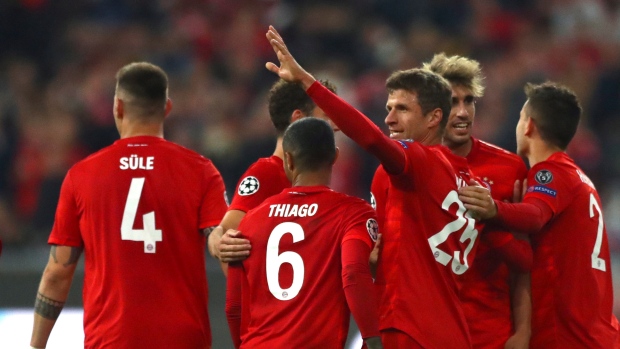 Müller came on for Philippe Coutinho in the 83rd minute and scored in the first minute of injury time when he ran behind the visiting defence and spun around to volley Thiago Alcantara's lobbed free kick past Canadian international goalkeeper Milan Borjan.

It was Müller's 106th appearance in the Champions League, making the 30-year-old Bayern's most capped player in the competition.

Robert Lewandowski had already sealed the result after striking from close range in the 80th, but it had been shaping up to be a frustrating evening for the Poland striker, who missed several chances after Kingsley Coman opened the scoring in the 34th.

"We had the whole game under control, but we had many chances and didn't make the most of them," Lewandowski said. "In the end it was only three goals, not five or six."

Bayern failed to turn almost total possession in the first half into clear-cut scoring opportunities.

Marko Marin, Red Star's playmaker and a former German international, went closest for the visitors in a rare attack when he shot just wide of the far post before Lewandowski scored.

Even Bayern goalkeeper Manuel Neuer was off his best as he misjudged a simple back-pass and was forced to clear in the 13th.

Making his first start for Bayern, Coutinho nearly scored a stunning opener on his Champions League debut for the side but his well-struck volley flew just over the bar.

"He had a great game," Bayern coach Niko Kovac said of the Brazilian. "He brings another dimension to our game when he's on the ball."

Coutinho also had a goal ruled out for offside, and Lewandowski went close with a free kick after the break, before Borjan made a brilliant save to deny Perisic.

Perisic again went close midway through the half when he controlled the ball on his chest and lobbed the goalkeeper, only to see the effort come back off the crossbar. Lewandowski missed the rebound with the goal at his mercy, but finally struck after the visitors failed to clear.

Tottenham drew 2-2 at Olympiakos in the other Group B game.

Borjan had a busy evening in the Red Star goal.

Bayern had 65 per cent possession and outshot Red Star 23-6 (10-0 in shots on target). The Germans also hit the woodwork twice and had 14 corners to Red Star's two.

Fellow Canadian Alphonso Davies was on the Bayern bench.