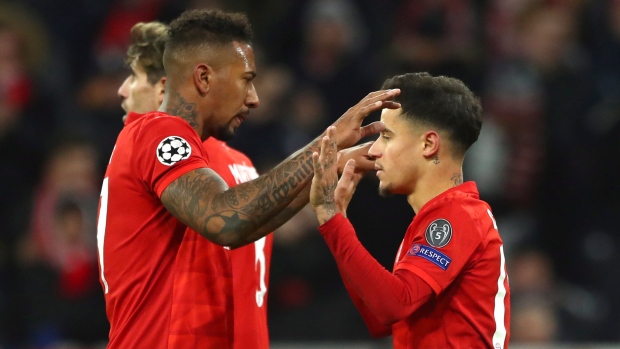 MUNICH — Bayern Munich finished the Champions League group stage as the only team to win all its matches after beating Tottenham 3-1 in a game between two already-qualified sides on Wednesday.

Two-and-a-half months after getting thrashed 7-2 by Bayern in London, Tottenham at least managed to keep the scoreline respectable as recently hired manager Jose Mourinho fielded a weakened lineup with his team guaranteed second place.

Kingsley Coman and Thomas Müller scored for Bayern in the first half, either side of a first goal for Tottenham by off-season signing Ryan Sessegnon.

Philippe Coutinho, who struck the crossbar with a long-range effort in the first half, curled home a third goal in the 64th minute to clinch a sixth straight win in Group B for Bayern, whose poor recent form in the Bundesliga has seen Germany's biggest team slip to seventh place.

It is the first time Bayern has ended the group stage with maximum points. Real Madrid was the last team to achieve that feat, in the 2014-15 season.

The only negative for Bayern was the sight of Coman being forced off in pain after landing awkwardly on his left leg as he tried to keep the ball in play by the touchline just before halftime.

It was a second loss in six games for Mourinho in all competitions since he took charge as the replacement for Mauricio Pochettino, but he showed where his priorities lay by resting star players including Harry Kane, Dele Alli and Son Heung-min amid a grueling fixture load.

It also gave Mourinho a chance to see players who are currently on the fringe of the team, like Argentina internationals Juan Foyth and Giovani Lo Celso and unsettled playmaker Christian Eriksen

“A good match for me,” Mourinho said. “I don't want to speak about conclusions because it is too strong a word, but I would say important information.”

“We knew the match was important for other reasons. We didn't want a result that leaves a shadow on us but I think positive things about many of the boys.”

Coman put Bayern in front with a calm finish into the bottom corner in the 14th minute after receiving a pass from Serge Gnabry, who was another player to hit the goal frame in the first half as Bayern poured forward.

Sessegnon started for the first time since joining from Fulham — he had previously made three appearances as a substitute — and marked the occasion by driving home a fierce shot inside Manuel Neuer's near post after a pass from Lo Celso was deflected into his path by Jerome Boateng.

Müller came on as a substitute for Coman and had a quick impact, forcing the ball home from close range in the 45th after the ball had rebounded off the post from Alphonso Davies' shot.

The second half was more low-key but illuminated by Coutinho's goal from the edge of the area.

Robert Lewandowski was an unused substitute for Bayern.