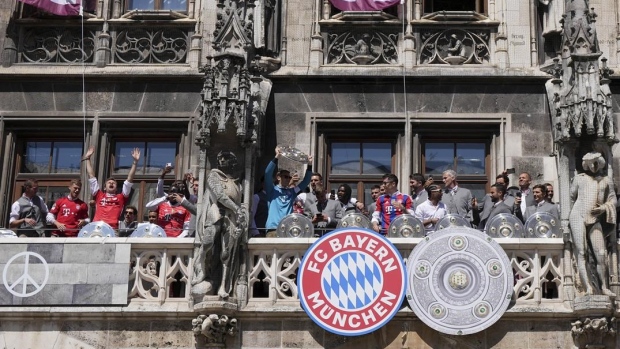 BERLIN (AP) — Bayern Munich’s league title celebrations were tainted by a sense of underachievement this year. It was the only trophy this season.

Speculation about the future of Robert Lewandowski is also adding to a sense of unease at the club, and Bayern fans called for the Poland forward to stay during the celebrations at Munich town hall on Marienplatz on Sunday.

The novelty of winning Germany’s championship is wearing thin after a record-extending 10 consecutive Bundesliga titles. Bayern’s own lofty standards mean players and club officials are focusing more on the trophies that got away.

“We played a good season but not a very good season,” honorary Bayern president and longtime powerbroker Uli Hoeneß said. “For a very good season, we would have progressed further in the Champions League and German Cup. But we clearly achieved the minimum target for the season.”

Even the minimum target was underwhelming with many associated with the club previously wishing for a greater challenge.

Lewandowski, who has finished as the Bundesliga's leading scorer for the last five seasons in a row, is pushing for a move to Barcelona. But Bayern CEO Oliver Kahn says the player will fulfill his contract.

“We just have to see how it all develops,” Kahn said. “We have a contract with Robert till 2023 and that’s how long he’ll stay.”

If any club were to make a sizeable offer for the 33-year-old player, Bayern would be forced to reconsider.

“From what I hear and it’s also my opinion, you don’t give him away,” Hoeneß said. “The whole circus will be finished on Sept. 2, we can live with that. I’ve always known Robert to be a top professional. He also knew for a year beforehand in Dortmund that he would go to Bayern and he played an outstanding season at the time. That’s why I’m 100% certain that Robert will play very well for us next year.”

Bayern midfielder Joshua Kimmich is not so sure.

“He’ll be difficult to replace,” Kimmich said. “On the other hand, if a player says he wants to leave the club, then the club has to prepare for that and look around.”

Kimmich said he had “mixed feelings” as his teammates celebrated on the town hall balcony. He said it would have been better to celebrate immediately after Bayern clinched the league with a win against Borussia Dortmund on April 23, and he also regretted that it was only one title.

Bayern was surprised by a late goal from Spanish team Villarreal in the quarterfinals of the Champions League, while it was knocked out in the second round of the German Cup with a 5-0 loss at Borussia Mönchengladbach.

“We have to learn and understand that it’s not enough when we don’t give 100%. We also felt that at times in the Bundesliga,” said Kimmich, referring to losses at Bochum and Mainz. “It’s just not enough if we don’t go to our limits every day.”

Bayern coach Julian Nagelsmann, however, was clearly happy to celebrate with the fans from the balcony for the first time.

“As a small child I often stood below and always hoped to be standing up here sometime. Now a dream comes true,” said Nagelsmann, who told supporters he wanted more. “Next year I want to celebrate more titles with you.”