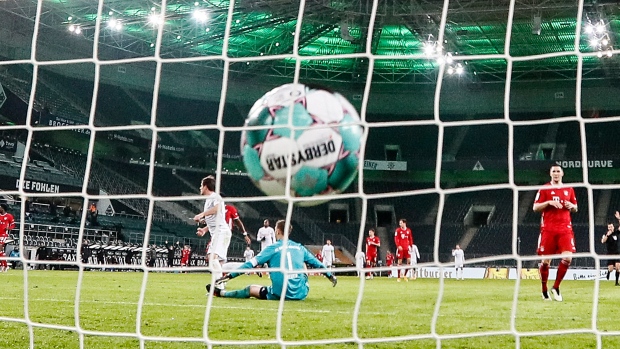 “Gladbach were very efficient. They brutally punished three mistakes that we made,” coach Hansi Flick said.

Bayern conceded first in each of its previous eight league games but recovered to lose none.

Flick was determined for his team to make a good start and Bayern was given an opening early on when Neuhaus was penalized through VAR for handball in the penalty area.

Leon Goretzka then won the ball in midfield, played a one-two with Leroy Sané, and doubled Bayern’s lead in the 26th.

But the defending champions’ issues hadn’t gone away, as Hofmann showed when he beat the visitors’ offside trap to score after a brilliant through ball from Lars Stindl.

Stindl won the ball from Joshua Kimmich to set up Hofmann again just before halftime. The goal was initially flagged offside, but a VAR review showed Hofmann was behind Niklas Süle when Stindl played him through. Hofmann had plenty of time to pick his spot and he stayed cool before slotting the ball inside the left post.

“We twice lost the ball where we shouldn’t lose the ball and we didn’t react to it properly,” Goretzka said.

Süle was again at fault when Gladbach got its third goal in the 49th, when his wayward pass was intercepted by Hofmann, who played a one-two with Breel Embolo before laying the ball off for Neuhaus, who let fly inside the top-right corner.

“Unfortunately, they punished these two or three bad passes that we had in the buildup,” Thomas Müller said. “But in the end it’s pointless to talk about the goals conceded. We didn’t make enough of our pressure in the second half.”

Leipzig can move to the top on Saturday with a win at home over Borussia Dortmund.