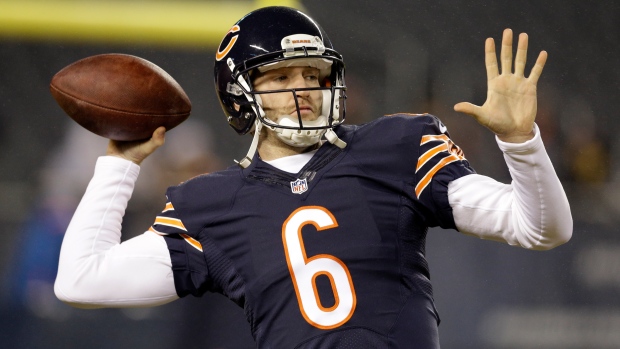 LAKE FOREST, Ill. - The Chicago Bears benched Jay Cutler on Thursday, deciding to start Jimmy Clausen against this Detroit Lions this weekend in favour of their franchise quarterback who signed a massive, seven-year deal less than a year ago.

Coach Marc Trestman said Cutler will be available as the backup for Sunday's game at Soldier Field, where boos have rained down on a punchless, porous team that is now 5-9 and playing out the string after starting the season with legitimate hopes of a deep playoff run. They will miss the playoffs for the seventh time in eight seasons.

Trestman said it was "certainly not an easy decision" and Cutler was certainly taken aback.

"Shocked, I think at first," Cutler said of his reaction. Asked if he believed the team was committed to him, Cutler added: "I don't know if I can answer that."

"Everyone would wonder that," he said.

The move fuels the idea that the Bears are in a state of dysfunction and that the future of everyone from general manager Phil Emery on down is open to discussion. There has been plenty of speculation about Trestman, now in his second year, not to mention defensive co-ordinator Mel Tucker and offensive co-ordinator Aaron Kromer.

Cutler's future is also in question despite the new contract.

"I would like to stay here," he said, adding that he would be able to play again next year for Trestman if things went that way, though "we would have to figure some things out in the off-season."

Cutler leads the league in interceptions (18) and turnovers (24) and he was benched after arguably his worst game of the season in Monday's loss to New Orleans. He threw three interceptions and got sacked a season-high seven times as the Bears fell meekly at home to the Saints, 31-15.

That performance came after Cutler found himself at the centre of a storm last week, after Kromer admitted he was a source behind a report by the NFL Network criticizing the quarterback's ability to identify when plays should be changed at the line.

That might have sealed Kromer's fate. But there could be a long list of personnel taking the fall.

The defence has ranked among the league's worst in two years with Tucker, and the offence has taken a big step back in Year 2 under Trestman.

Then, there's Emery, who fired Lovie Smith after a 10-win season in 2012 and chose Trestman over Bruce Arians, how rolling with the Cardinals. He also signed Cutler to that seven-year contract at the end of last season when the Bears could have applied the franchise tag instead.

Even so, the timing of the benching seems curious considering the Bears are out of contention. Trestman, who came with a reputation for getting the most out of quarterbacks, acknowledged this week that has not happened with Cutler.

So the Bears are going with Clausen, the former Notre Dame star. He has appeared in three games this season and attempted nine passes, completing three. He was 1-9 in 10 starts as a rookie with Carolina in 2010 and threw for 1,558 yards that year. Carolina then drafted Cam Newton.

The Bears signed Clausen in June, and he beat out Jordan Palmer for the backup job.