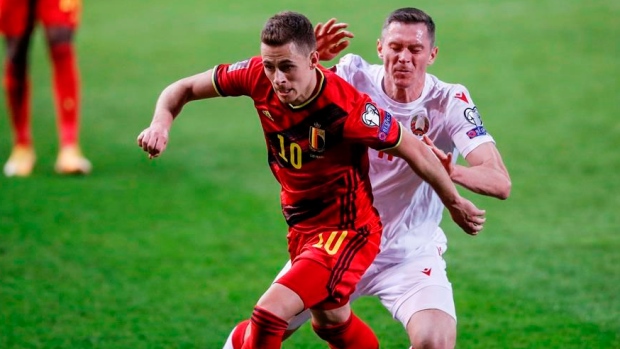 Group B: Belgium vs. Russia

"I'm going into my ninth year next year and I haven't won s---,” an emotional Nathan MacKinnon told the media following the Colorado Avalanche’s loss on Thursday night to the Vegas Golden Knights that eliminated the team from the Stanley Cup Playoffs.

It’s unclear how many hockey fans there might be on Roberto Martinez’s Red Devils, if any, but what MacKinnon said would likely resonate with Belgium’s superstar-laden roster. Heading into Euro 2020, s--- is exactly what Belgium’s “Golden Generation” has won, thus far. Sure, the team finished third at World Cup 2018 in Russia, but with its core aging and teams around them improving rapidly, this tournament might be the last chance that this Belgium side has at real glory.

The good news for the Belgians is that their chance at glory is far from a long one. There are few teams that can match this embarrassment of riches when it comes to quality and depth at Martinez’s disposal. Up and down this roster, there is game-changing talent like Inter’s Romelu Lukaku, Kevin De Bruyne of Manchester City (who is unlikely to feature in the opener after picking up a facial injury during the Champions League final) and Leicester City’s Youri Tielemans.

Because of this array of weaponry, the Red Devils are the heavy favourite to win Group B, but before they can do that, they must take care of a Russia side playing in front of a boisterous home crowd.

Coverage begins on Saturday on TSN1/3 at 2pm et/11am pt. You can also watch the game on TSN.ca, the TSN app and TSN Direct.

"I agree that the first game is often the most difficult in a big tournament,” Martinez said. “You have to get into the tournament both mentally and physically. It'll be a real test [on Saturday], because we know this team very well, but they also know us by heart and they'll have the support of their fans."

Stanislav Cherchesov’s side might not have the closeness that the Belgians possess, but they’re certainly no strangers to one another. Of the 26 men on the roster, only four play outside of the Russian Premier League and 10 members of the roster come from Moscow-based teams alone.

The Russians enter Euro 2020 with what they believe is a very achievable path to the knockout round and open the group stage with what could be its most difficult match of the tournament. A good showing against Belgium could get Russia on the right track ahead of what should be a key battle with Denmark.

"There are maybe some nerves but I don't feel any pressure,” veteran striker Artem Dzyuba said. “We've analyzed all the games, know exactly what we should do. I like it that Russia are tactically flexible and may have different approaches to the game."

What could aid Russia in this matchup is how well they know this Belgian side. The two teams were grouped together during Euro qualifying and finished well ahead of the rest of their group as the top two teams. But in their two head-to-head encounters, Belgium dominated, winning 4-1 and 3-1, respectively, with Real Madrid’s Eden Hazard scoring four goals over the two games.

If the Russians have learned anything from those two matches like Dzyuba says they have, Saturday will be their opportunity to show it.