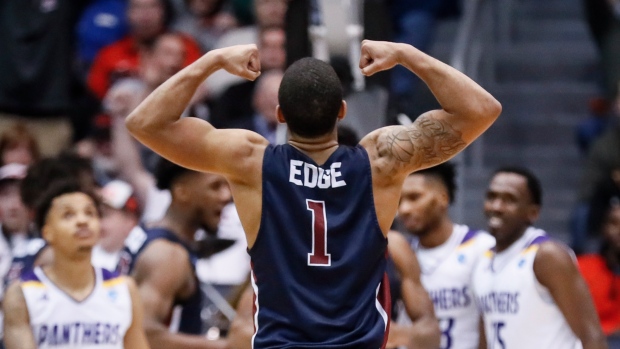 DAYTON, Ohio -- Eleven months ago, Fairleigh Dickinson coach Greg Herenda was seriously ill with life-threatening blood clots. On Tuesday night, he danced on the court and hugged his players after they secured the first NCAA Tournament win in school history.

Senior guard Darnell Edge scored a career-high 33 points and Jahlil Jenkinshad 20 of his 22 points in the second half as the Knights capped a furious comeback by taking down Prairie View A&M 82-76 in a First Four game on Tuesday night.

"It's overwhelming," said Herenda, in his sixth season at the Hackensack, New Jersey, school. "When you coach for 35 years and you take a team to an NCAA Tournament and a team that, when I got here six years ago, we had nothing. And to build it, and then it's here, and it's so sad that every coach can't experience this."

Fairleigh Dickinson (21-13), which got the automatic tournament bid by winning the Northeast Conference Tournament, won its first NCAA tourney game in six tries. The Knights move on to play Gonzaga, the No. 1 seed in West Region, on Thursday in Salt Lake City.

Prairie View (22-13), also seeking its first tournament win, built up 13-point leads in both halves, but Fairleigh Dickinson took control in the second half behind the shooting of Edge and Jenkins.

"Jahlil Jenkins has the biggest heart in Ohio right now," Herenda said. "As a sophomore, he took over the game in the second half."

A 3-pointer by Gary Blackston pulled Prairie View back to within two points, 78-76, but a layup from Mike Holloway Jr. and a pair of free throws by Edge with 17 seconds left sealed it for Fairleigh Dickinson.

Blackston led the Panthers with 26 points and Devonte Patterson had 17.

"Having coach go through that last year, I remember us being in practice and him always just telling us that he just wanted to be there with us," Edge said. "All he thought about while he was in the hospital was us. So we rallied together, and it's just a great win for us, for our program."

Prairie View threatened to run away with it early, ripping off a 14-0 first-half run as Fairleigh Dickinson committed nine turnovers in the first 10 minutes to fall into a 19-6 hole. The Knights chipped away, with Edge hitting a 3-pointer and a layup in the last minute of the half to reduce the deficit to 41-34 at the intermission.

The Knights went down by 13 again early in the second, but methodically came back.

"Could have gone either way, but I guess the best team made plays late and they were able to win the game," Prairie View coach Byron Smith said.

Fairleigh Dickinson returned to the First Four three years after their first trip to Dayton. It didn't go well that time.

The Knights were beaten by Florida Gulf Coast by 31 points.

"It was just a great feeling for me, being here three years ago and losing by over 30 points and then coming back this year and being able to get a win," Edge said. "It's a great feeling. It's history."

Fairleigh Dickinson: The Knights earned their first tournament win by staging a furious comeback and holding off Prairie View down the stretch.

Prairie View: The Panthers' only previous tournament appearance was 21 years ago. They had high hopes after winning the Southwestern Athletic Conference regular season and tournament, going 21-2 to finish the season.

Fairleigh Dickinson: Enters the main NCAA bracket as the No. 16 seed in the West Region and plays Gonzaga on Thursday.

The 11th-seeded Bruins (27-5) play Maryland on Thursday in the East Region.

Belmont got at-large bid after losing to Murray State in the Ohio Valley Conference Tournament title game. The Bruins showed that the selection committee's faith was not misplaced, getting the breakthrough win on their eighth try.

The loss sent Temple (23-10) into a transition at the top. Dunphy is retiring after his 13th season at Temple, where he replaced John Chaney. Dunphy previously coached 17 seasons at Penn.

He was hoping to coach another day, but Belmont's high-scoring offense pulled away at the end. Senior guard Shizz Alston Jr. led the Owls with 21 points.

The Bruins entered the tournament second in the nation at 87.4 points per game. The Owls' aim was to slow the high-percentage offense just enough to give themselves a chance. Temple hung in during a first half that featured five lead changes and ended with Belmont ahead 37-31.

The Bruins pushed their lead to 11 points by hitting their first two shots in the second half. Alston, who led the American Athletic Conference at 19.7 points per game, hit three 3-pointers as the Owls surged ahead 50-46. Alston has been the Owls' catalyst, scoring at least 20 points in each of his last nine games.

McClain led a 16-3 run that put Belmont ahead to stay, and Belmont pushed the lead to 12 while closing it out. McClain finished two points shy of his career high.

The Bruins' balanced offense had more than enough even though leading scorer Dylan Windler was held to five points on 2-of-7 shooting. Windler came in averaging 21.4 points.

Temple: Former Owls star Aaron McKie takes over for Dunphy. McKie is an assistant on Dunphy's staff. The Owls haven't won an NCAA Tournament game since 2013, when they beat N.C. State at Dayton before losing in the second round. They went 2-8 in eight appearances under Dunphy.

Belmont: The Bruins got only the second at-large NCAA Tournament bid in Ohio Valley Conference history, along with Middle Tennessee in 1987. They'd dropped their seven appearances when they had automatic bids.

Belmont heads to Jacksonville, Florida, for its game against Maryland.