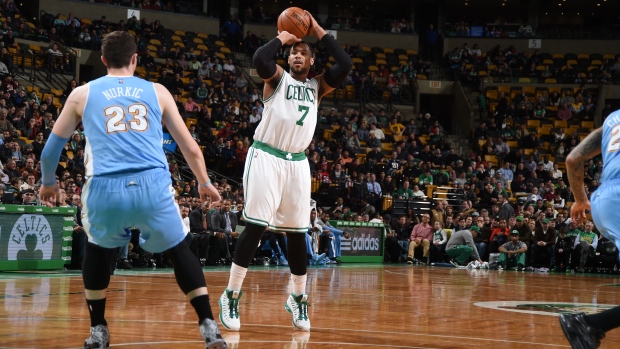 BOSTON - Jared Sullinger sat out the first quarter and then missed his first five shots.

By the end, he found his touch.

Benched at the start because of lateness, Sullinger made two free throws with 22.8 seconds left, lifting the Boston Celtics over the Denver Nuggets 104-100 Wednesday night.

"Sometimes you miss shots. You can't make them all," he said, avoiding postgame questions about his tardiness. "Those are good shots. I'm only human."

Coach Brad Stevens kept Sullinger out of the lineup for the second straight home game after the forward was late for the afternoon shootaround. On Sunday, he was late for a walkthrough.

"I thought he was solid once he got his rhythm," Stevens said. "He got that first pass when he first checked in and it was obvious he had sat for a while. He short-armed it."

Before the game Sullinger said: "Everybody in this locker room has probably been late one time. They understood. Things happen. You can't let it affect you. We've still got a game."

"Just because I was late doesn't mean I was late to the game. We've still got to play a game and our main objective is to win whether I start, whether I get benched, whether I not dress at all. We just want to win basketball games," he said.

Sullinger wound up scoring 14 points. It was 100-all when he was fouled by Kenneth Faried driving to the basket.

The Celtics won their second in a row and seemed energized by a loud ovation from the crowd that honoured several New England Patriots who were in attendance after winning the Super Bowl. Defensive back Malcolm Butler, who saved Sunday's victory over Seattle with an interception in the closing seconds, was among those at the game.

Ty Lawson led the Nuggets with 23 points and eight assists. Aaron Afflalo had 18 points and Faried had 17 points and 11 rebounds. Denver has lost four in a row and 11 of 12.

"From the effort standpoint and what we've been getting lately, I can live with this a lot better because they did fight all the way until the end," Nuggets coach Brian Shaw said.

Trailing by 10 early in the final quarter, Denver went on a 14-4 run and tied it at 92 on Wilson Chandler's two free throws with just under six minutes to play. Lawson sparked the spree by controlling the offence, setting up teammates for a few easy baskets and also making a 3-pointer.

"It's tough," Afflalo said. "We've been in a lot of close games. We're just not pulling them out."

They were tied three times over the ensuing four minutes before Bradley made a jumper from the left corner, moving Boston ahead 100-98 with 1:25 left.

Afflalo then missed a jumper and, after the Nuggets got the offensive rebound, came up short on a fallaway. Danilo Gallinari was fouled grabbing a rebound on the other end of the floor, stepped to the line and made both, tying it with 41 seconds left.

Shaw said he watched a parade honouring the Super Bowl champs from his hotel window. "It brought back great memories," he said. "I was fortunate enough to be involved a few parades. It's a time when you really feel the appreciation of the fans." Shaw was with the NBA champion Los Angeles Lakers in 2000, '01 and '02.

Nuggets: G Jameer Nelson, acquired from Boston on Jan. 13, didn't play because coach Brian Shaw said he "strained his Achilles" in a loss at Philadelphia on Tuesday. ... Faried was hit in the head in the third quarter and went to the locker room, holding a towel to the left side of his face for a slight gash. He returned to the game in the fourth. ... Shaw had a simple explanation for his team's recent losing stretch. "It starts with defence," he said. "When we play defence we score. When we don't we have trouble scoring."

Celtics: Patriots owner Robert Kraft and the New England players were honoured at centre court with a big cheer at the end of the first quarter. The Celtics played highlights of the win on the Jumbotron before they entered.

Nuggets: At Detroit on Friday.