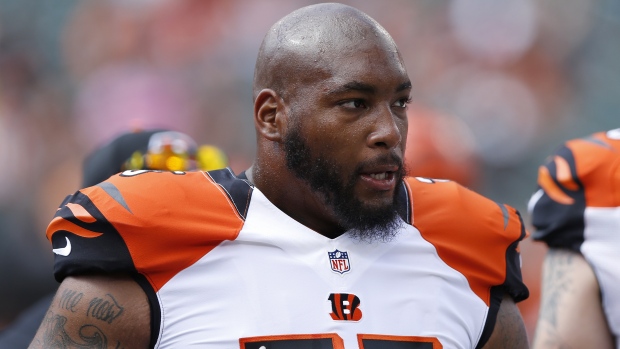 CINCINNATI - Bengals defensive tackle Devon Still is eager to shake hands with Saints coach Sean Payton and say thanks in person for buying so many of his jerseys.

Payton bought 100 of Still's jerseys — at $100 apiece — when the lineman and the Bengals were starting a campaign to raise money for pediatric cancer research and treatment. Still's 4-year-old daughter, Leah, started another round of treatment for cancer this week at a Philadelphia hospital.

Still and Payton have talked on the phone. They plan to meet on the field Sunday in New Orleans after the Bengals (5-3-1) play the Saints (4-5) in an important game for both teams.

"He's basically what got the ball rolling with everything," Still said. "A lot of the credit goes to him for what he did.

"You can't thank somebody the way you want to or are supposed to over the phone. It's something you have to do face-to-face, so I'm definitely looking forward to meeting him."

Leah was diagnosed with cancer in early June and had a tumour removed from her abdomen. The Bengals decided to donate proceeds from sales of Still's No. 75 jersey to Children's Hospital in Cincinnati for pediatric cancer research.

The team presented a check for more than $1 million to the hospital after the first quarter of a 24-3 loss to Cleveland last Thursday night at Paul Brown Stadium. Leah flew in from Philadelphia and was on the field for a loud ovation from the crowd.

Payton was one of the first NFL coaches outside of Cincinnati to embrace the cause. His example prompted others to donate to pediatric cancer research. Payton heard about Still's daughter on a radio program while driving his car.

"Just hearing how they handled it was pretty inspirational," Payton said this week, during a conference call with reporters in Cincinnati. "It was really spontaneous and something I thought would be a good gesture."

Payton has some connections with the Bengals. He was an assistant coach at Miami University in nearby Oxford, Ohio, in the 1990s and knows the Brown family that owns the Bengals. His familiarity with the team was a factor in deciding to support Still.

Still's story has gotten a lot of attention from players around the league as well. Browns quarterback Brian Hoyer went up to him after the game on Thursday night to encourage him.

"He was just saying that he respects what I'm doing for pediatric cancer and telling me how he gives me a lot of credit for being able to deal with what's going on with my daughter and still be out here playing football," Still said.

Hoyer said that Still's story resonated with him as a parent.

"I can't imagine what he's gone through," Hoyer said. "Reading the stories, it gets you choked up because you put yourself in that situation and with especially how demanding this job is."

Leah has gotten chemotherapy and radiation treatment. She started another round on Wednesday, and doctors hope this one will get rid of the remaining cancer cells. She'll have another body scan in four to six weeks to see if the cancer is gone or if more treatment is needed

"Hopefully this is the one and only," Still said.

Notes: Right tackle Andre Smith (ankle), linebacker Vontaze Burfict (knee), cornerback Terence Newman (knee) and running back Giovani Bernard (shoulder/hip) were held out of practice on Thursday. Burfict has missed the last two games while recovering from knee surgery and was limping this week. ... Linebacker Rey Maualuga was limited in practice for the second day in a row. He missed the last four games with a strained left hamstring and returned to practice this week.