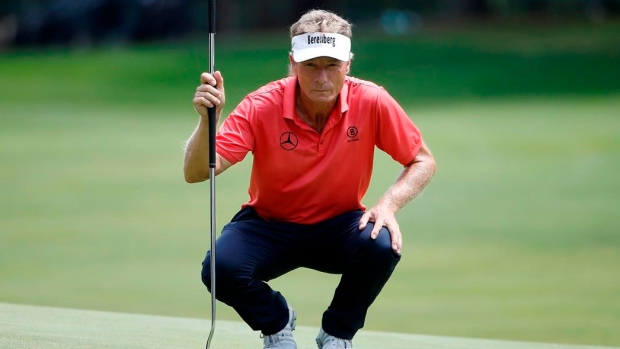 GRAND BLANC, Mich. (AP) — Bernhard Langer birdied the final hole for a 6-under 66 and a share of the second-round lead Saturday in The Ally Challenge.

A day after shooting his age on his 64th birthday, Langer had six birdies in a bogey-free round at Warwick Hills to match Doug Barron at 14-under 130.

“I think it’s demanding off the tee,” Langer said. “You’ve got to really hit the ball straight, keep it between the trees and on the short grass. Especially when you play preferred lies the way we have the last two days, it’s even more premium to hit it in the fairway because you can clean the ball and have a good lie.”

“It’s going to take a low one because it’s really bunched up,” Langer said. “It’s not just Doug Barron and I, there’s about 15, 20 guys that can still win this tournament going low. We can’t afford to sit on our laurels and make pars and hope to win this tournament. You’ve got to go low tomorrow to have a chance to take the trophy away.”

Barron shot 64. He won the Shaw Charity Classic two weeks ago in Calgary for his second senior title.

Joe Durant was a stroke back after a 66. Thongchai Jaidee was 12 under after a 65.

Defending champion Jim Furyk was 8 under, following an opening 65 with a 71.