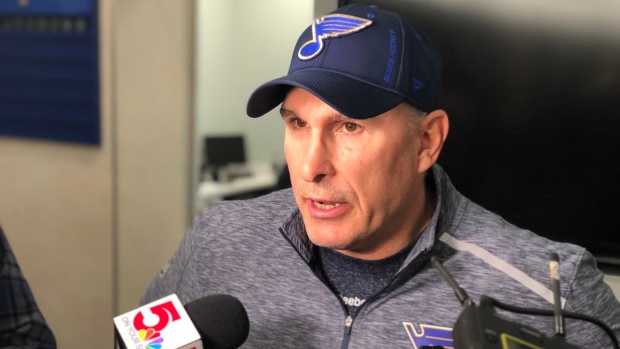 ST. LOUIS - Two tough guys who wore glorious mullets when they first met in Philadelphia in 1986 gathered for a beer in Arizona after their teams clashed last December.

Rick Tocchet’s Arizona Coyotes just thumped Craig Berube’s St. Louis Blues by a 6-1 margin, sinking them back into 31st place in the NHL. Berube was two weeks into the job as the Blues’ interim coach, a tag that still hasn’t officially been removed.

“He looked at me and he said, ‘I need to do two things: change some stuff defensively and get them to believe,’” Tocchet recalled on Tuesday. “He said this team was good, but they had to believe. I believed him. He wasn’t down at all – and we had just pounded them. I think they hit rock bottom at that moment. That was their turning point.”

One of the first things Berube did when the Blues got home was take down the standings board in their dressing room at Enterprise Center.

“Why? Probably because it didn’t look very good at the time,” Berube said Tuesday. “Where we were at, and to get to where we had to get to, it’s a long process. To see that every day – [the standings board] it doesn’t change enough and that’s just a negative effect.”

The wall that collects the Blues’ game-winning pucks was pretty barren. St. Louis was 9-13-3 after being picked to be a Central Division contender.

“I probably considered taking that down, too,” Berube said, laughing.

Somehow, the Blues are on the precipice of their first Stanley Cup final appearance since Scotty Bowman was their head coach in 1970. One reason is that Berube’s mental toughness has rubbed off on them.

“What he’s done is made them a team,” said Bowman, the only man to lead the Blues to the final. “He was a role player and he did it well. They know how to handle a team, what makes one successful. He’s made everyone feel important. You can tell.”

Berube, 53, carved out a 1,054-game NHL career as an undrafted player despite never scoring more than 18 points in any season. His 3,149 penalty minutes are seventh all-time – three spots ahead of Tocchet. He is pound-for-pound one of the toughest guys ever to play in the NHL. One stare will send a shiver through your spine.

“Guys that have a long career like that are the guys that really get it as far as team play because they’ve had to sacrifice a lot,” said Blues defenceman Jay Bouwmeester. “He saw it differently than top-end guys. He’s really put us into positions where we’re going to be better as players. Everyone’s had a role and everyone’s just kind of ran with it.”

Berube is a hockey lifer. The Calahoo, Alta., native made his NHL debut in 1986 with Tocchet, closed out his career in the AHL in 2004, then immediately transitioned to coaching as an AHL assistant the following season during the NHL lockout.

He has plied the coaching trade for 15 years now, working as AHL assistant to AHL head coach to NHL assistant. Berube served under Ken Hitchcock, John Stevens and Peter Laviolette for seven seasons in Philadelphia before getting a crack to replace Laviolette as the Flyers’ head man in 2013.

Berube was fired after parts of two seasons and a 76-58-28 record. He went back to the AHL when given a chance by Blues GM Doug Armstrong to run their farm team in Chicago. Brayden Schenn played for Berube in both Philadelphia and St. Louis and said he's noticed a change. Schenn surmised that since Berube was an assistant there for so long that everyone knew ‘Chief’ as a guy you could talk to or joke around with.

“I do notice a little difference,” Schenn said. “He will still have fun with guys. He’ll sit with the boys in the steam room for a few minutes or whatever. He’s fun. The guys love him. But I think he’s kept to himself a little bit more.”

Tocchet said that Berube has “kept a smaller inner circle” since getting a second crack.

“You learn to not listen to the outside as much,” said Tocchet, also on his second NHL head coaching job in Arizona. “What I love about Chief is that he’s the same as a friend as he is a coach. He’ll give you his honest opinion – he’s brutally honest. He also understands players’ needs. So when you mix that with his bluntness that has a lot of staying power.

“He is able to get guys to have a team-first mentality, to sacrifice their own agenda. That’s hard to do.”

There is a team mantra posted on the Blues’ dressing room wall that says: ‘Culture beats strategy every time.’ But Bouwmeester said Berube’s attitude can best be described as, “[Bleep] happens. What can you do about it?”

“I think that’s kind of the attitude we’ve taken,” Bouwmeester said. “He’s easy to mirror. When things are tense, he’ll make a joke. He knows because he’s been around it forever.”

On paper, the Blues were a good team before Berube arrived. No one will question that.

But Berube is a Jack Adams Award finalist because he has built up a group that’s now as mentally tough as he was on the ice.

He’s instilled an attitude that says “[bleep] happens” after a brutal missed call on a hand pass in Game 3 of the Western Conference final – one that responds by outscoring the San Jose Sharks 7-1 since then.

“He taught us, ‘Don’t look back,’” Bouwmeester said. “Because what’s the point?”