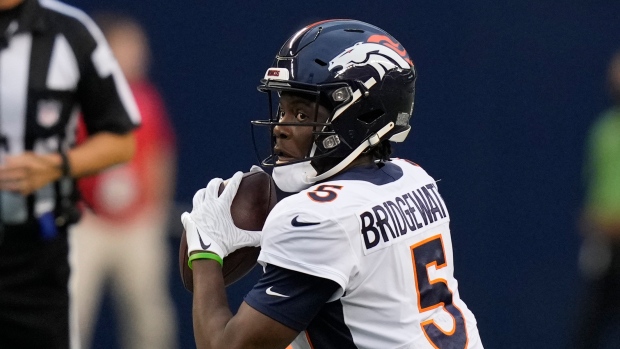 NFL underdogs delivered in the first two weeks of the season, going a combined 21-10 against the spread.

Those trends continued on Thursday Night Football, when the Carolina Panthers beat the Houston Texans and covered as an 8.5-point favourite.

Meanwhile, this group has done an excellent job providing bettors with an edge, going 3-0 in Week 2 to improve to 5-1 on the season.

Here are our best bets for the third Sunday of the NFL season.

Maybe I’m playing with fire here, but the Broncos have been good to me early on this season, so it’s hard for me to look elsewhere with the Jets set to visit Denver on Sunday.

Teddy Bridgewater is 36-13 against the spread as a starting quarterback in the NFL, including 14-7 ATS as a betting favourite.

If the number for this game holds at -10, it will be the first time that Bridgewater has been a double-digit favourite in his career.

While I would usually stay away from numbers this big, the Jets have been so bad that I really can’t see them going into Denver and keeping this game close.

Bridgewater has been excellent early on, and I can’t see this defence giving up much to rookie quarterback Zach Wilson.

New York is just 1-7 against the spread in September games dating back to 2019.

After a 19-point loss to the New England Patriots, I think the Jets struggle again in this one.

For the third Sunday in a row, I’m rolling with Bridgewater and the Broncos.

It’s a big number, but I think Denver will get there.

If it ain’t broke, don’t fix it. That’s my motto when it comes to betting against Jameis Winston.

Last week, he rewarded our Panthers tickets with a dreadful start, and looked like the Jameis of old, unlike his outlier performance in Week 1 against Green Bay.

The Saints managed just seven points, 128 total yards and six first downs last week in Carolina, some of the worst numbers ever produced in a Sean Payton-led offence since he took over the team back in 2006.

No Saints wide receiver caught more than two passes, while Winston finished as the team’s leading runner by racking up a grand total of 19 rushing yards on three carries.

The former No. 1 overall pick was sacked four times and threw two interceptions last week. He’s been hit on an NFL-high 30 per cent of his drop backs so far, and he’s about to get a hit a lot more by the Patriots on Sunday.

Offensively, the Pats want to run the ball as much as possible, but when they do take to the air with Mac Jones, they should find success. Jones has played mistake-free football through two weeks, completing 74 per cent of his passes. The New Orleans pass rush ranks 26th per PFF, while the Saints coverage unit ranks 22nd.

To make matters worse, Marcus Davenport, the Saints’ top pass rusher, is on IR, while No. 1 cornerback Marshon Lattimore may miss his second straight game with a hand injury.

Here, we’re presented with a game featuring teams moving in opposite directions.

The Baltimore Ravens enter Sunday on the heels of an emotional one-point win over the Kansas City Chiefs.

And the Detroit Lions just got their doors blown off in the second half of a Monday Night Football game against the Green Bay Packers.

The Lions have given up at least 35 points and 340 yards of offence in both games this season and now Lamar Jackson and company roll into town with a ton of momentum.

And we’ve seen in recent years what this Ravens offence is capable off when it gets rolling.

Back in Week 9 of the 2019 season, the Ravens made a statement with a 17-point win over Tom Brady and the New England Patriots on Sunday Night Football.

Their next game came just seven days later when they steamrolled the Cincinnati Bengals 49-13.

I think we could see something similar on Sunday.

And Baltimore has had the best cover percentage in the NFL since 2017 with their 21-9-3 record ATS in road games.

I think at the end of the day this offence is just going to be too much for a lacklustre Lions’ team to keep up with.