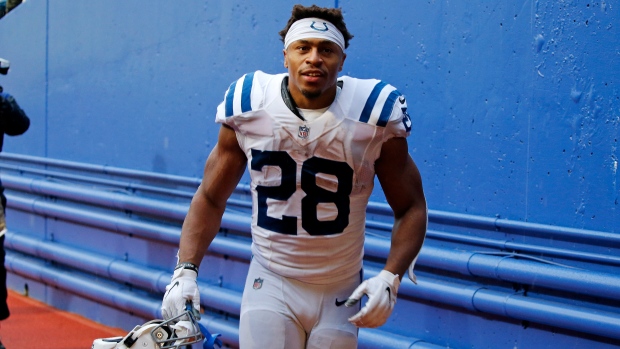 Week 12 in the NFL was somewhat of an anomaly, with nine matchups between teams that were .500 or better.

That was the highest number of games between teams with .500 or better records in Week 12 or later since the merger.

This Sunday will look much different in the NFL, as we get a number of lopsided matchups.

Looking at the board for the rest of Week 13, we have nine games that currently feature a point spread of seven points or more.

After a win and cover by the Dallas Cowboys as a 6.5-point favourite against the New Orleans Saints on Thursday Night Football, NFL underdogs are 100-78-1 against the spread this season.

Will the dogs bark again in Week 13?

Here are some of our best bets for Sunday’s games.

If you’ve been following along with this column this season, you’re likely not shocked by my best bet.

Sure, the days of betting on Taylor to go over 74.5 rushing yards in a game are long gone, but that doesn’t mean I’m jumping off the train just yet.

In last week’s 38-31 loss to the Tampa Bay Buccaneers, Taylor was held under 100 rushing yards for just the second time in his past seven games.

The Indianapolis offence completely revolves around Taylor on the ground, and I don’t think he will need very many touches to break the century mark against a Houston defence that has allowed a league-high 4.8 yards per carry to opposing running backs this season.

In their Week 6 meeting against the Texans, Taylor averaged 10.4 yards per carry for 145 yards and two touchdowns.

Unfortunately for betting purposes, Taylor anytime TD is -250, so I’ll stick with over 105.5 rushing yards as my best bet for Sunday.

It’s a big number, but not big enough that the favourite to win AP NFL Offensive Player of the Year can’t cover it.

The Baltimore Ravens enter Week 13 as the AFC’s top seed, but is anyone actually afraid of the Ravens?

Baltimore’s last five games consist of a blowout loss to the Cincinnati Bengals, a come-from-behind win versus the Vikings, followed by a pathetic showing on Thursday Night Football against the Miami Dolphins. They followed up that 1-2 stretch with back-to-back wins over the Chicago Bears and Cleveland Browns, but scored just 32 total points in the process.

Outside of the defeat to Cincy, none of their other opponents during that stretch own a record above .500, yet we’re supposed to believe they’re worthy of being a 4.5-point favourite in Pittsburgh?

Lamar Jackson has been a turnover machine over his last five games, throwing nine interceptions, while the defence ranks 30th in yards per play allowed over the past three weeks.

The Steelers, meanwhile, are no longer a serious AFC threat, but they have owned Jackson during his career. Lamar has made two starts versus Pittsburgh and has been picked off five times. He’s also fumbled five times against the Steelers, while averaging 1.5 yards less per carry than his career average.

Pittsburgh was also a blowout victim of the Bengals last week, but has been incredible covering spreads as a home underdog. Under Mike Tomlin, the Steelers are 12-3-2 against the spread as a home ‘dog, covering by an average of six points.

Since 2008, these arch rivals have met 26 times with each team winning 13 games. Twenty of the 26 meetings have been one-score contests, with 17 of those matchups decided by four points or less.

If that doesn’t scream under, then I don’t know what will.

But if you need more reasons to take the under, let me provide a few.

Something happened a few weeks ago to this Baltimore Ravens offence.

After averaging 27.62 points per game through the opening eight weeks of the season, Baltimore has failed to score at least 17 points in three-consecutive games.

Quarterback Lamar Jackson enters this game 1-1 against Pittsburgh in his career, and has accounted for three touchdowns and seven turnovers in those two games.

Meanwhile, the offence in Pittsburgh hasn’t looked much better.

The Steelers have managed to score more than 20 points just two times in their last five games.

The under has hit in three-straight Baltimore games, and the over has only cashed in the last two Steelers games due to the 41 points their defence has given up in back-to-back games.

I don’t see Baltimore’s offence exploding this week, and like their defence to keep Pittsburgh in check as well.

I’m riding with Under 44 points in this game.