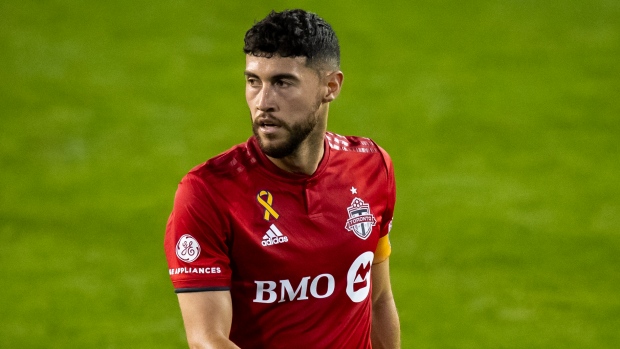 The injury news is getting better for Toronto FC ahead of Saturday's 'home opener' at Orlando's Exploria Stadium against the Vancouver Whitecaps.

"And other guys are really close. But those guys specifically are options. They're back in it, which is really good to see," Armas told reporters Thursday.

"We're getting stronger by the day. Options are always what the coach wants here so we're getting to a good place," said Armas, who despite the latest update has shown early in his Toronto tenure that he is not much for sharing specifics when it comes to injuries.

Spanish playmaker Alejandro Pozuelo (thigh) and French centre back Chris Mavinga (calf) have more work to do in their return to play protocol.

"Chris is really close," Armas added. "Alejandro is just behind him. They're both getting there."

Pressed on the issue, he said a decision on Mavinga's availability will be made Friday. Pozuelo seems a longer shot to play.

"Both are questionable. Chris is slightly closer. We'll make the decision (Friday)"

Winger Erickson Gallardo (groin) and striker Ifunanyachi Achara (knee) are recovering from surgery. Armas said Gallardo's issue had been "bugging him for a while."

"It's just been something that has bitten us early," Armas said of the injuries. "And I take some of that responsibility because we've chosen to push the intensity hard."

TFC has set up shop in Orlando this season due to pandemic-related travel restrictions. It plans to play home games in both Orlando and Tampa.

Toronto's pre-season was interrupted by an outbreak of COVID-19 back home among players and staff, forcing the team to shut down its training facility. Upon arriving in Florida, it had few chances to play friendlies ahead of a Scotiabank CONCACAF Champions League round-of-16 tie against Mexico's Club Leon.

Toronto won the series 3-2 on aggregate but lost both Altidore and Gallardo to injury.

Armas has instituted a high-energy pressing style of play, which demands a lot in terms of fitness.

This report by The Canadian Press was first published April 22, 2021.