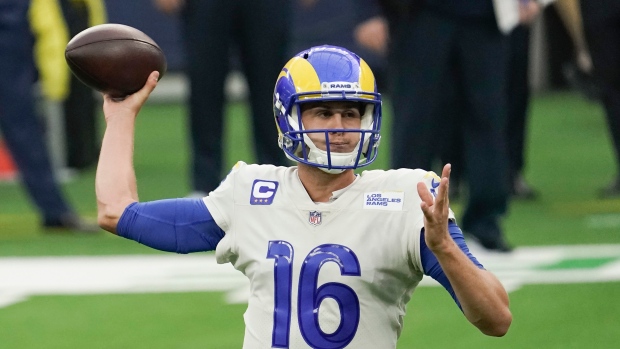 The 5-1 Chicago Bears will visit the 4-2 Los Angeles Rams on Monday Night Football on TSN.

Chicago is fresh off of back-to-back victories, while Los Angeles was upset by San Francisco last week on Sunday Night Football.

Both of these teams feature excellent defences, which is a big reason why the total is so low.

The over/under is currently sitting at just 44.5, with the Rams firmly entrenched as a six-point favorite.

They’ve lost both games they’ve played against teams with winning records, and were held to just 16 points last week against the depleted 49ers.

Chicago will be the best defence they’ve faced this season by far, as the Bears rank fifth in that category by DVOA.

They rank 10th against the run and sixth against the pass by Pro Football Focus’ metrics. Chicago also boasts the fourth-highest-graded pass rush.

That last stat is especially valuable because Jared Goff is one of the most pressure-sensitive quarterbacks in the league.

Goff owns a 38 per cent completion rate and a 43.2 passer rating when under pressure this season.

Jared Goff's Only Two Games Against The Chicago Bears Defense:

In two career meetings versus Chicago, he’s failed to exceed 200 yards passing in either game. He’s also been picked off five times.

The Bears meanwhile, face an equally daunting task against Aaron Donald and company.

The Rams generate pressure at the league’s sixth-highest clip and boast PFF’s eighth-best coverage unit, which is led by Jalen Ramsey.

If there’s one aspect of their defence they need to improve, it’s their performance against the run. L.A. surrendered 122 yards on the ground to the 49ers in Week 6, and rank 21st in run defence according to PFF.

Chicago would be well suited to slow the game down and keep the ball on the ground, as they tend to excel in low-scoring slugfests.

Four of the Bears’ six games have produced totals below 40, with Chicago posting a 3-1 record in those contests.

In six games this season, not once have the Bears allowed an opposing quarterback to throw for more than one touchdown.

If those guys couldn’t put up enough points to beat Chicago, there should be serious doubt about Goff’s ability to do so.

Given his past struggles against this defence and his sensitivity to pressure, taking the Bears at +6 feels like a smart play.

The Rams secondary does an excellent job at limiting wide receiver production, but they have struggled to cover tight ends.

This was Jimmy Graham's 3rd down touchdown on a Go route in the red zone this season, most in the NFL. No other player has more than one.#TBvsCHI | Powered by @awscloud pic.twitter.com/xifkHGnr90

That’s good news for Jimmy Graham, who just happens to be one of Nick Foles’ favorite targets.

Since Foles took over for Mitchell Trubisky, Graham is averaging seven targets per game and leads the team with four touchdown catches.

He’s a great bet to find the end zone in this matchup.