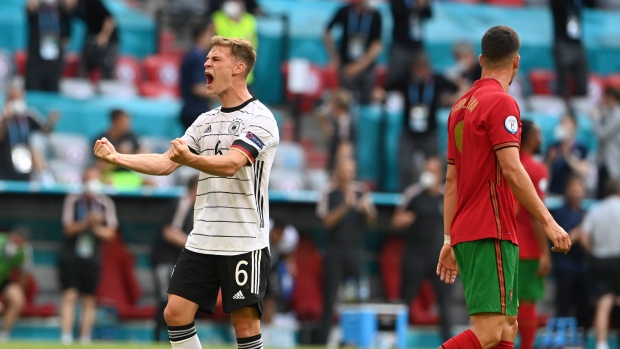 The path to the Euro 2020 Round of 16 is a little more difficult for the teams that ended up in Group F, which features three of the top five pre-tournament choices to win the event.

The defending World Cup champions France entered the tournament at +450 odds to win the title.

Germany and the reigning Euro champions Portugal weren’t far behind at +800 to win the tournament.

We are less than 24 hours away from the start of #EURO2020 across the @TSN_Sports network. Here is a look at the current odds for all 24 teams to win the tournament. pic.twitter.com/ncrDbn3SRt

The fact that France, Germany and Portugal all ended up in Group F, along with Hungary, made each of their outlooks a little more complicated.

For Germany in particular, a loss to France in their Euro 2020 opener didn’t help their chances.

Joachim Löw’s side entered Matchday 2 in need of at least a point versus Portugal to keep their hopes to advance to the Round of 16 alive.

Their all-in moment came shortly after falling behind 1-0 on a goal by Cristiano Ronaldo in the 15th minute.

At +200 to win the match, Germany pressured Portugal into back-to-back own goals in less than five minutes to take a 2-1 lead.

Portugal became the first team in the history of the European Championships to concede two own-goals in one game.

Leading 2-1 entering the second half, Kai Havertz put the Germans ahead by two goals with a goal in the 51st minute.

Robin Gosens added to Germany’s lead in the 60th minute to make it 4-1.

Germany picks up where they left off as Kai Havertz extends the lead in the second half!#EURO2020 pic.twitter.com/P8f8BbjYTf

Diogo Jota answered for Portugal in the 67th minute to cut the deficit to two, but that’s as close as they would get.

Germany became the first team in the history of the European Championships to score four goals against the defending tournament champions.

Another goal for Germany and they've got a three-goal lead!#EURO2020 pic.twitter.com/nVD8aCpQNx

Germany’s win, combined with Hungary’s draw versus France, opened the door wide open at the top of Group F.

All four teams are still in contention to win the group and reach the knockout stage.

For Germany, which entered Euro 2020 at +150 to win Group F, a win over Hungary on Wednesday would guarantee a trip to the knockout stage.

At the same time, a loss to Hungary combined with a draw between Portugal and France would eliminate Germany.

Meanwhile, the Germans could still win the group with a victory over Hungary and a Portugal win over France.

After surviving an early scare against Portugal and pulling out the victory, Germany’s focus now shifts to finishing first in Group F as a potential springboard to a deep run at Euro 2020.