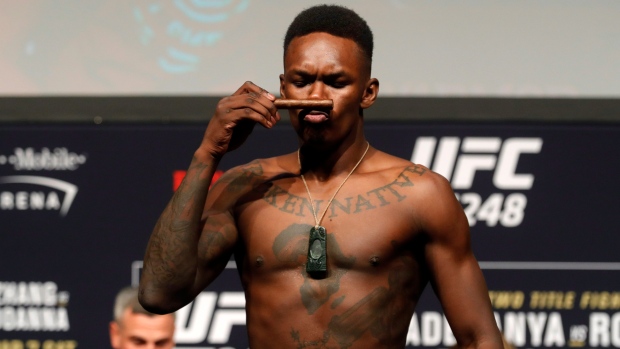 A main event bout between two fighters with unblemished professional records is what mixed martial arts enthusiasts can look forward to when undefeated middleweight champion Israel Adesanya takes on undefeated challenger Paulo Costa this Saturday at UFC 253 on Fight Island in Abu Dhabi.

If that isn’t enough, the vacant light heavyweight championship will be on the line in the co-main event when Dominick Reyes faces Jan Blachowicz.

Both enter the fight undefeated but only one will leave undefeated (save for a draw or no contest).

Adesanya versus Costa is one of the most anticipated middleweight championship bouts in some time and the stylistic matchup is particularly intriguing.

It’s the finesse, the technique, the creativity, the precision of the former world champion kickboxer Adesanya against the power, brute strength, forward-moving Costa.

These odds point to the Nigerian-born Adesanya winning this bout 63 per cent of the time and that seems about right.

The advantage for Adesanya, who’s based in New Zealand, is that it is almost a certainty that he has dealt with pressure fighters like Costa on multiple occasions during his time as a kickboxer. What the Brazilian Costa brings to the table will be nothing new for the well-versed striker and Costa has indicated that his game plan is to walk forward and attack with volume and power to overwhelm the champion.

Costa, 29, has pointed to his high volume and high accuracy stats as an advantage that he believes he will have in the bout.

The other element that I believe plays a factor in Adesanya’s status as the favourite is that while Costa has an undefeated professional record, he did suffer a decision loss on The Ultimate Fighter that did not count against his record.

On the flip side, the 31-year-old Adesanya’s last two kickboxing losses were to pressure fighters in Alex Pereira and Jason Wilnis and those are a solid blueprint from which Costa can work.

Adesanya (19-0) is the rightful favourite here and the odds make sense, but it’s impossible to count out the voluminous, pressure fighting style of Costa (13-0).

A New Era at Light Heavyweight

The Jon Jones era came to an end in August when the most prolific fighter in the division’s history relinquished the title and announced that he planned to move to the heavyweight division.

Reyes gave Jones all that he could handle earlier this year and Blachowicz has won seven of his last eight, which made this matchup the clear choice.

Reyes is the deserved favourite as he holds advantages over Blachowicz just about everywhere with the exception of perhaps veteran savvy and wrestling.

The 30-year-old Reyes has looked great over the course of his UFC tenure, winning his first six bouts before running into Jones in a title bout that many people felt he should have won on the judges’ scorecards.

Blachowicz (26-8) has had his trademark “Polish Power” on display in two of his last three bouts, which ended in devastating knockouts over Luke Rockhold and Corey Anderson respectively.

It will be an uphill battle for the 37-year-old Blachowicz, whose best path would be to make this a boring bout involving clinch work against the cage, takedowns and point fighting if he is unable to catch Reyes with a big shot.

Reyes (12-1) has never been finished, but his bout against Volkan Oezdemir is a good example of how to stifle him.

The American will look to land a powerful shot using his trademark burst that has caught opponents like Chris Weidman and Jared Cannonier in the past.

Coin toss for the Canadian

In a near even-money bout, Calgary’s Hakeem Dawodu looks to build upon his four-fight win streak and momentum in the division against Russian Zubaira Tukhugov, a training partner of Khabib Nurmagomedov.

Tukhugov, 29, showed off his power in his last bout against Kevin Aguilar, scoring a first-round knockout, but it would be in the best interest of Tukhugov to utilize his wrestling against Dawodu, who should have a clear striking advantage.

One major advantage that the 29-year-old Dawodu should have in this bout is cardio, which will come in handy if the bout goes into the later rounds.

Tukhugov’s best path to victory is to get Dawodu down and hold him there because he will be in danger for as long as this stays on the feet.

Dawodu will want to keep the fight standing and attack with volume. He has been taken down in the past, but does have an impressive 85 per cent takedown defence rate.