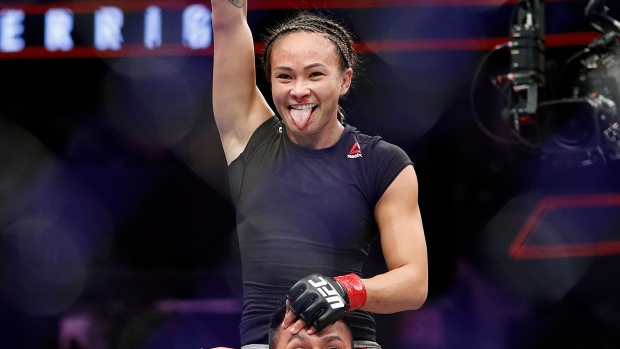 Following the recent postponement of Glover Teixeira versus Thiago Santos, the original main event for this UFC Fight Night card, the co-main event between Michelle Waterson and Angela Hill was promoted to the main event and extended from three rounds to five Saturday night at the UFC APEX in Las Vegas.

Both athletes are coming off losses to tough opponents; Waterson to former champion Carla Esparza, and Hill in a controversial split decision loss to former title challenger Claudia Gadelha.

With Waterson and Hill being 34 and 35 respectively, this is a crossroads fight for both athletes with a title opportunity in the stacked strawweight division being difficult to come by.

In her eighth bout since the start of 2019, the 35-year-old Hill looks to utilize her volume striking to get the better of Waterson, who has struggled against opponents who have been able to outland her.

Surprisingly, Hill opens as a favourite against the more established, younger Waterson.

While the line has tightened up a bit since the opener (Hill opened at -170, according to bestfightodds.com), Hill remains the favourite and much of that is due in part to her style being one that Waterson has struggled with in the past.

Waterson, 34, is 3-0 against older opponents in the UFC (wins over Kowalkiewicz, Herrig and Magana), but is yet to win a UFC bout against an opponent who has landed more strikes than she has.

If this bout goes into the later rounds, it is a near certainty that Hill will outland Waterson, but given Waterson’s karate style, it will be up to her to do more damage than Hill in a convincing enough fashion to sway the judges should the bout go the distance.

Following two straight wins as a big underdog, Worthy is finally in the driver’s seat as a favourite against undefeated Moroccan prospect Azaitar.

Fool me once, shame on you, fool me twice, shame on me – that’s how those who wagered against the American Worthy must have felt following back-to-back wins as a big underdog, the first of which was one of the all-time biggest UFC upsets when Worthy defeated Devante Smith in his UFC debut.

However, is Worthy being favoured over Azaitar an overcorrection of the steering wheel?

The Azaitar brothers (Ottoman’s older brother, Abu, is also on the UFC roster) came into the promotion with some hype behind them and now Ottman hopes to remain undefeated.

Worthy has proven that he is capable of beating solid prospects with his back-to-back wins over Smith followed by Luis Pena, but will he be able to do the same against a vicious Azaitar? While Smith and Pena are good fighters, Azaitar is on their level and where Worthy was a large underdog in his first two bouts, he is now getting more respect from the betting public.

After a history of engaging in back-and-forth slugfests, injuries finally caught up with Barbarena. He has been sidelined for nearly 15 months, returning after undergoing spinal surgery to face Ivy, who lost his UFC debut in less than a minute three months ago.

In Barbarena’s 10 UFC bouts, he has only been a favourite on three occasions, going 2-1 in those bouts.

Ivy will be the least experienced opponent that Barbarena has faced since joining the UFC nearly six years ago.

It appears that the UFC is easing Barbarena back into competition by pitting him against the relatively inexperienced Ivy.

While we know of Barbarena’s durability from his previous bouts, Ivy has a 100 per cent finishing rate in his MMA career and that’s what makes this particular bout so intriguing.

Mike Rodriguez is 1-2 as a favourite in the UFC, and he is a sizeable favourite against veteran Ed Herman.

This will be Herman’s 10th straight bout as an underdog - he is 4-5 in those previous nine.

If Roosevelt Roberts closes as a favourite (he sits at -115 at the time of publishing), he will have been a favourite in all of his UFC bouts. He is 4-2 in the UFC.

Canadian Kyle Nelson is 0-2 as an underdog in the UFC and enters his bout against Billy Quarantillo as a more than 2-to-1 underdog.

Julia Avila has been at least a 2-to-1 favourite in all of her UFC bouts. Her opponent Sijara Eubanks is an underdog for only the second time in her UFC career. Her UFC record is 3-2.